The ship (luxury yacht, if you please) makes all sorts of noises as it transits overnight: the rushing of the sea, the hum of the engines and generators, the rattle of the balcony screens, the flushing of the vacuum toilets and the occasional sounds of people movement in the corridor or overhead. Just what you need when you have a 6.30 start for a zodiac ride up the Hunter River.

We arrived in Prince Frederick Harbour, at the mouth of the Hunter River at a bit after 6 AM. Pretty much on time we boarded our zodiac, piloted by Rebecca, aka Re, one of the naturalists. Like all of the expedition crew that we’ve met so far, she has an interesting life story. She’s keen to stay on the ship for the next voyage, but has to check with her boss, difficult to do with such limited, slow and intermittent satellite internet. The other complication is that if she does stay on she’ll be away from her partner for 3 months, and she’s not sure how that will go down! Her speciality is marine animals, in particular sharks, and her work has taken her to places as diverse as Mexico and Fiji – and Australia, of course.

Spotted several crocodiles on the two and a half hour expedition, including one ‘adorable’ baby. Also spotted were an Eastern Osprey, two Western Reef Egrets, two Grey Plovers and two Striated Herons. The mangroves were remarkable, more so as we learned of their role in the ecology and in providing a nursery for young marine animals. The Life of Pi was brought to mind as we passed one section of mangroves that the high tide had created what looked like a floating island.

A short turn around for coffee and pastries and we were back on the zodiacs for the quick trip to the beach where the helicopters would pick us up and deliver us to the Mitchell Falls. There were two elements of this cruise that we were particularly focussed on: the Bungle Bungle Ranges and the Mitchell Falls. As we’ve recorded, the first on the bucket list was outstanding. We are pleased to report that this adventure was equally fulfilling and perhaps more so.

D is not a fan of flying – helicopters only make his phobias worse (about flying – the others stay the same). There were three seat options: front, next to pilot; rear, in the middle of three; or rear on the outside, with no doors. 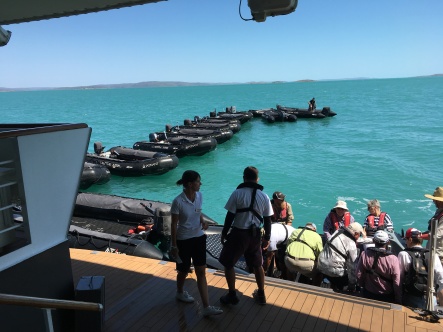 T commandeered the front seat and a Frenchman who had greater fears than D grabbed the middle seat. This was not a good start, but the sight of the Frenchman’s white knuckle, vice-like grip on the central pillar was a boon for D, as he was able to lord it over this scaredy cat. In the event the flight was smooth and the vista over the harbour, the Hunter River, the Mitchell Plateau and the Mitchell River was magnificent. We flew over several birds: T identified a Sea Eagle, D a (probable) Brahminy Kite, and we were’t able to positively identify two long-necked white birds, probably some sort of Ibis. And again we saw two Torresian Crows. 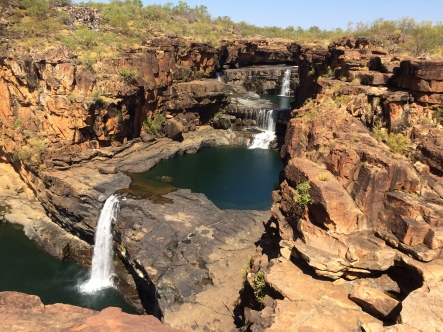 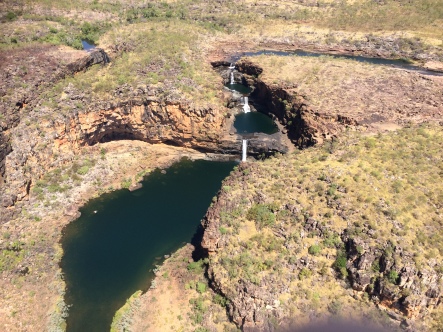 We were off-loaded for about an hour at the falls. A reasonable trek along a rocky path took us to a viewing platform where we could appreciate the beauty of the falls. A man from Adelaide, who was on his way to see his son in Meekathara, said he’d been there for an hour just soaking up the experience. When asked how he’d got here on his way from A to M, given that it was somewhat indirect, he said he’d just taken a wrong turn at Alice Springs. That is a very significant, let alone intentional, wrong turn! There is access to the falls off the Gibb River Road, and there were two couples who’d driven in and were spending a couple of nights in the area – our pilot had told us that there is a four kilometer walk in from the camp ground.

By the time we were zodiac-ed back to the ship, the two restaurants had closed, so we’d now missed breakfast (early start) and lunch (late return). And to add to our hunger woes (warning: first world problem alert) we could only have the 24/7 Room Service in our room rather than in the outdoor deck area with our fellow flyers in the same plight. So that’s what we did. The meal was delivered by a Filipino waiter, a reminder that our indulgent cruise was being serviced by workers from The Philippines, Indonesia and the like, all on 10 month continuous contracts, working 10 hour days, no days off, involving separation from their families for all of that time, and no doubt on wages that we’d not be prepared to accept. The angles on this set up are many – there are pros and cons, but we are still left with this lingering ’guilt’ that why has an accident of birth given us so much advantage?

And tonight – a move binge: The Darkest Hour (about Churchill at the time of Dunkirk followed by Paulette, a delightful French comedy about a granny who deals hash.

One thought on “Rivers and Falls”