A few small expeditions since the Kimberley, but on 14 May we’re off to Scandinavia. We will post on the blog.

We hadn’t been able to see much of the Kimberley when we visited in Gloria in 2007, as it was a two wheel drive vehicle which restricted where we were allowed to go – and it rained! This cruise with Ponant was a chance to not only see the Bungle Bungles but also many other iconic locations, plus aboriginal art, landscapes, rivers and falls, and wildlife. Again, recorded day-by-day in our Travel Diary blog. The blog was uploaded in spurts as we were often out of range of the internet.

A visit to NZ, ahead of a reunion in early December. Three weeks in a campervan in the South Island, then about two weeks in apartments in the North Island – all recorded in the Travel Diary blog.

A trip in our van to Central Australia, focussing on the West and East Mcdonnell Ranges – but other stops in between. Again, recorded in our Travel Diary blog.

A road trip from Anchorage, Alaska to Yellowstone National Park in the USA via Canada. Canada. Trip started with a cruise from Vancouver to Anchorage via the Inside Passage, them via motorhome south. The journey is chronicled in our Travel Diary.

Finally a window in our calendar where we could get away for a few days in the van. We were becoming worried that it had been so long that we would forget what to do: and that is indeed what did happen, fortunately only in very small matters, as well as a few things that we forgot to pack (despite extensive lists!).

So Friday 26 Feb saw us head out, intending to drive directly south towards Cann River after Cooma, but then turning east to Malacoota for some days enjoying the sun and paddling. But……there’s always a but….we decided that as we have this fantastic off road rig that we’d go to the Cascades, a waterfall off the Tuross Road via Nimitabel. We’d started that journey years ago in Gloria, but it is definitely a four wheel drive track. All went well as far as Nimitabel: and that included a stop at the bakery there for coffee and some bakery delights. T had googled instructions and dutifully scrawled them on to a yellow post it note, so we knew where to go. Almost. The directions were fine for quite a while, and signs and turns appeared where they should have until we reached a Y intersection and no indication whether to go left or right. We went right. You’ve probably already guessed that we should have gone left. We ended up on the Wadbilliga Trail, and Trail is a pretty accurate description, although perhaps exaggerating its status a bit. We wound around bends, up and down very steep inclines on a narrow track often not really wide enough for our rig. It was quite eerie at times being hemmed in by ferns and bush taller than our vehicles. And there was a mist coming down from the ridge tops, at times heavy enough to be almost like rain. After several tortuous hours in low range we came out at Wadbilliga Crossing, where a lone man was setting up his tent. He seemed a bit surprised that we didn’t have a map (D didn’t want to tell him that he’d been an Army officer, and that a map would probably have got us even more lost!) He was kind enough to show us where we’d gone wrong, and also that access to this point was far easier from the other direction – the good news being that was our way out and we didn’t have to go back the same way. He was also probably a bit worried about these two lunatics so suggested there was a better camping spot for our rig a few kms down the road – as indeed there was at Wadbilliga. So that’s where we spent the night, enjoying the constant drip of water from the mist onto the van roof, just like being under corrugated iron. And it was all ours.

Saturday 27 February. So next morning, on the road again, a bit easier than yesterday but still a bit tricky: narrow, winding and many blind corners. Hit Yowrie (a locality) then on to Cobargo. Had planned to stop for coffee and brunch but the place was humming with folk there for the Folk Festival, so we opted to head for Tathra instead, to the little beach side cafe. Lovely brunch, watching wild surf – staff said there’d been several rescues already and indeed while we were there the water pretty much emptied of swimmers. From Tathra to Malacoota. Decided to check out a possible free camping spot on the Wallagaraugh Road, only to find it was a fairly expensive caravan park. T had fantastic practice doing a 75 point turn to turn around the rig – just as she was completing the 73rd turn the lady from the park yelled that we could come through the gate and turn, but we declined as all the hard work had been done. So on to Mallacoota. Oh dear – wall to wall caravans on the foreshore caravan park, and not much different at the others, so decided to head the 15 kms to Shipwreck Creek camp site in the Croajingalong NP. Road was horrific for a while (but not as bad as yesterday) but then improved from recent grading. Only five spots at this site, so we expected it to be full, but in the end only three were occupied, so that’s where we spent the night. We hadn’t booked, and there signs everywhere saying that you must, and that it was an offense to camp without a permit. We barely slept that night with the worry! Where have we got to in Australia when you can’t even camp in a NP without everything being totally regulated and regimented? And threats of goal or worse? Anyway, it was very peaceful, and we spent some time sharing the fire with John and Jocelyn, who live an a property about 6 km out of Malacoota, and just came out for a bit of a change. John was a musician/architect, aged around 80; Jocelyn had worked in early childhood, an ambulance driver and something else. They promised to find us if we stayed in Malacoota.

Sunday 28 February. On the road into Malacoota. The parks did not appeal any more the next day, so we found a water supply to top up the van’s tanks (those little tap devices are a must to get around the absence of handles on public taps!), a few rations, some fuel and off to Wingan Inlet. Having been scared by the signs of dire consequences at Shipwreck, T rang through a booking to Parks Victoria, to be told off by the lady there for not having booked ahead. She was amazed that we’d left home without a plan about our destinations and seemed to think this was irresponsible. She probably thinks our children are too, for not keeping proper control over obviously incompetent elderly parents.

34 Kms of windy, dusty, narrow dirt road, but in generally good condition – about an hour’s drive. We were a bit worried that we’d be able to get in as the sign said “Not recommended for caravans” but although the campground was tight, we slotted in nicely, and with no near neighbors (except one).
So three nights in the bush, kayaking on the inlet, a walk to Elusive Lake – and no internet or mobile connection. Just great. Home to mid-30s heat on Wednesday.

South America beckons – departure on 12 March.  We will visit Chile and Peru. Not looking forward to the early start needed to catch our 6.10 AM flight out of Canberra to link with flight to Santiago.

But our bags are – almost – packed, we’ve filled out the departure cards, and four alarm clocks have been set – for 04.15 (but don’t tell Trish that). Maybe a Pisco Sour on arrival?

Well, that trip is very much over – shared on FB and on our Travel Diary. 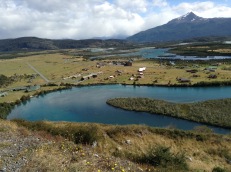 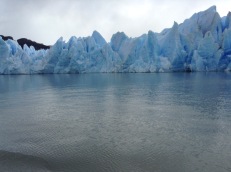 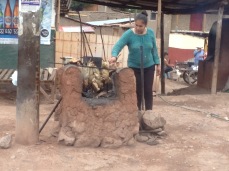 We travelled through Chile & Peru, admittedly mostly with a guide (a tour group of 4 was about right!) with no hassles and no issues.