We forgot to mention a near disaster two nights ago – perhaps due to embarrassment. We’d used the oven to cook some snapper fillets (lovely) and after switching it off decided, about an hour later, to put the tea towels in the warm oven to dry and then later to do the same with some underwear. The tea towels were fine – removed and replaced by the unmentionables. A while later, D was reading at the table and remarked at the smell. He checked: the oven was still on and T’s bra was cooking. Some quick response, and only minor burns, retrieved the situation, and T was able to wear the ‘medium rare’ bra today despite a hole where molten nylon had oozed. It will be the next look.

Saturday morning chores, showers etc. – and the van door locked itself with both of us outside, and the keys inside. Fortunately, a side window was unlocked, and we were able to slide it open and remove the insect screen. But where is a grandchild when you need one? Lily? Maya? Elsie? Theo? Nowhere to be found. D went looking and found two willing, if bemused helpers, but their parents were in the shower and were not impressed at being interrupted. Guess they had just soaped up. Anyway, the kids were ordered inside and D slinked away. T had meantime accosted a small Chinese family group with no English. Not to be deterred, T thought, and gestured to them to follow her. They went away promising to come back with a child – we then observed them with a larger group looking and acting a bit agitated. However, eventually they did come over, and the young (slight) mum climbed through the window and we were in! We have now left a spare key with the tour leader.

Washing put out in the sun (strung on rope between trees rather than put into a dryer), so time to visit the University of Alaska Fairbanks Museum. As well as providing a good coffee, it was a well-curated and presented collection that provided a snapshot of the state and its history. It was interspersed with a lot of art – one that especially appealed was the 50/50 collection. The Vogels had collected art from unknown artists over the years, and when later the artists had become well known the collection became valuable. They decided to donate 50 pieces to each of 50 state museums/art galleries. The Vogels weren’t rich: he was a postal worker and she was a librarian. They ‘lived frugally’ in an apartment in Manhattan, and befriended and sponsored many of the artists they collected. D particularly enjoyed a quote from Mrs. Vogel: ‘You don’t have to understand the art’ (or something like that) because that was his reaction to a lot of the pieces. This was a really lovely story.

On to the Large Animal Research Centre to see some Musk Ox (we’ve mentioned qiviut before – great Scrabble word!), to find that our sense of timing was completely astray: we arrived at 1625 and they closed at 1630. We were allowed in to look at one ox’s bum in the distance, plus the shape of another lying down. So I suppose we ticked that box, but were disappointed.

On to Creamers Dairy Field Refuge: this is a bird and forest sanctuary, where migratory birds breed over summer. A lovely boardwalk in the evening (inundated by mosquitoes) amongst birch and spruce and warm sunlight. 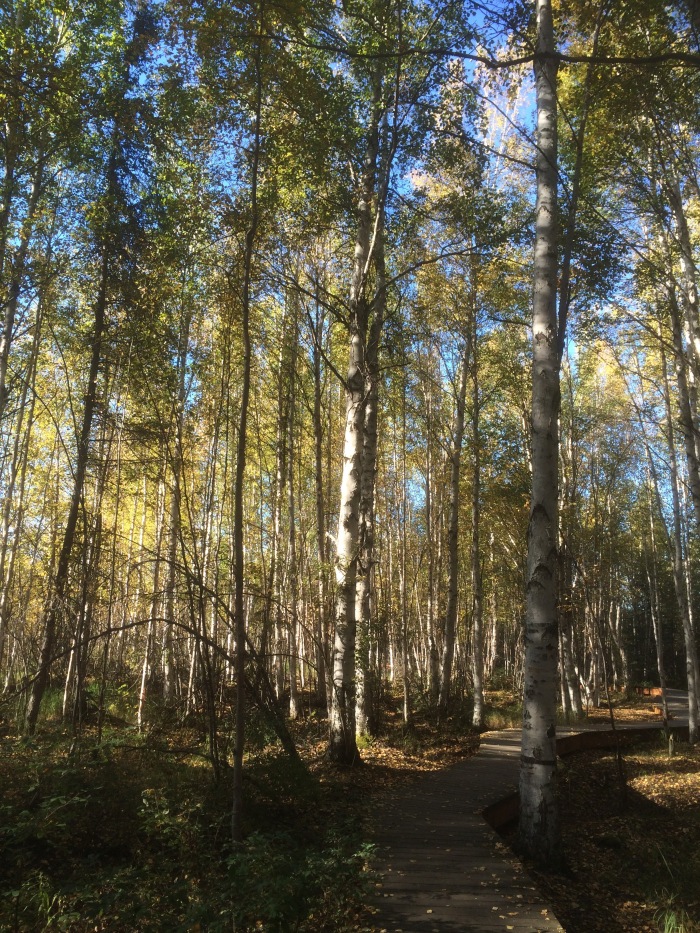 Back for Happy Hour, to share with our new friends who have turned out to be very easy and relaxed company. Also, as a general observation, we have found Alaskans to be seriously polite and helpful, both in direct contact and just casual meetings, with time to chat.

3 thoughts on “We Need a Tinker”