Our last day in the Scandinavian ‘sommer’…grey, then a gentle rain – fitting perhaps for some sad but expected news from home. D, having optimistically believed the forecast and gone out without a jacket of any kind, later succumbed and bought a second umbrella. A tram ride – again using the great public transport system – through a culturally more diverse part of town to Sofienberg and then via the Botanic Gardens to explore some Oslo art: the Munch Museet and its Exitexhibition, as it gets ready for a move to a whole new building on the waterfront. 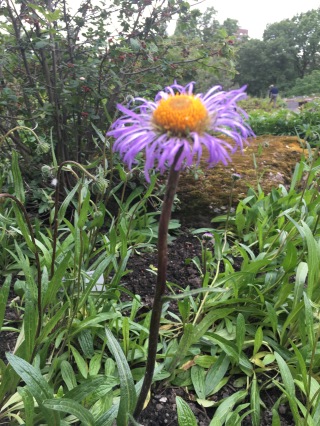 The exhibition was as much about the history of the current building, its shortcomings, politics and the 2004 theft of The Scream& The Madonna, as it was about Munch’s art of people and for people and the museum’s philosophy of accessibility, education etc. We knew nothing apart from the ‘screaming icon’, so it was terrific to learn about the enormous body of work Munch produced and his varied skills. Interestingly, in film footage from 1963 (opening of building) a young girl walks through the exhibition space with her mum(?) eating an icecream! T is taken by the technique of creating an image from colour stripes (The Scream) and loves the way Munch lets his bare canvas comes to the fore as a ‘textured white’ colour in its own right; but the highlight for her is Munch’s drawing/printing skills. The sick child is her favourite.

D has got the map (it’s correct for a change) & tram routes sorted so that the next stop is a ‘garn’ shop. T wants to find that missing colour for her knitting project. She’s decided that the knitting re-start will be a ‘sideways thing’ with colour stripes running vertically (after admiring a cardigan, worn by a French passenger on Nordlys) and has googled an appropriate retail spot. The ever-patient D finds things to amuse himself, mostly just observing daily life, while T chats to 3 women at Verbitt Garn Oslo (Weathered Yarn Oslo).

One woman is stitching: mending a vestment from the local church and conversation proceeds about ‘spirituality education’ today, where people find their ‘church’ etc. The other 2 women share their knitting techniques with T and comment that the Scandinavian system of knitting-in-the-round does not wear as well as the British system of knitting in sections and then stitching pieces together. They offer coffee and chocolate (theirs goes cold during the chatter) but then T sees D peering through the window (D: after 40 minutes!). It’s time to go….well, not actually immediately.

Conveniently, a local tram back into town continues on to allow  us to get off for a short harbour side walk to visit the Astrup Fearnley Museet. By now that second umbrella is proving its worth. Much of the contemporary collection leaves D wondering: are they really taking the piss? He’s pretty sure they are, even if they don’t mean to and really believe the guff they’ve written to explain their motivations. But several items in the latest acquisitions section resonate: the de-commissioned fire hoses, now called Gees Americanreminds us of Fiona’s printed firehoses from 2004. The traditional smocks-on-hessian collage is wonderful. 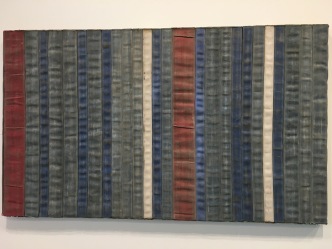 Library V-II by Liu Wei is a standout installation made from books – and see how you can actually peer down the alleyway. 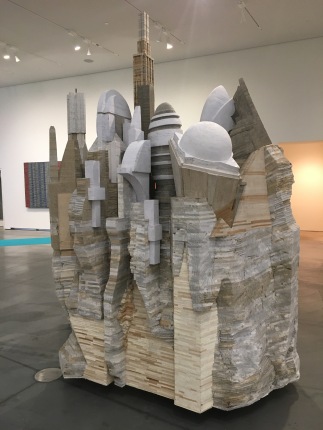 One had an impact on both of us – titled ‘Close of Business’ – about small business. 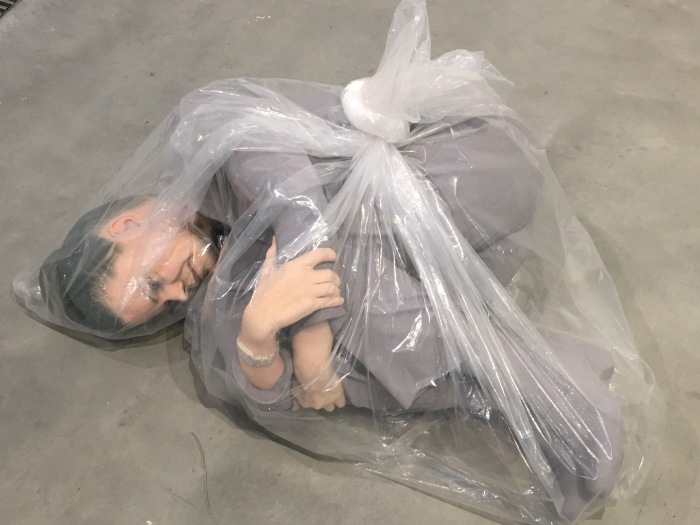 Then, in the second building of this gallery, the woodblocks of Anselm Kiefen were favourites for T (especially the piece with little Theo in the forest), while Damien Hirst’s works using butterflies, and flies (larvae) in resin were tops for D – however, the carcasses of sheep (arranged as symbols of crucifixion) and cows (cut longitudinally in half) preserved in formaldehyde didn’t really resonate. 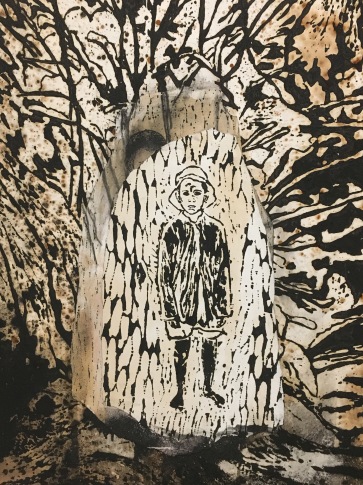 After a day of Oslo gallery art, it was back to the tram stop at 5pm rush hour in the rain…and another two images of Oslo ‘street art’ to complete the day. 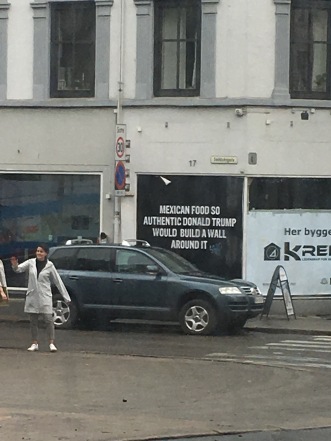 Tomorrow we fly via Helsinki to San Francisco – it will be an early start and a long day.

2 thoughts on “Munch ado about nothing”