Ptarmigan has a certain ring to it, but Chicken, as a compromise, is certainly easier! The town was to be named Ptarmigan, but the spelling couldn’t be agreed upon, so Chicken it is! The ptarmigan is the state bird and it changes colour completely depending on the season: mostly brown in summer and then in winter it becomes totally white, with feathers along its legs and feet.

A very long day to get here, some of it on dirt roads, but all in pretty good condition. T took the wheel for the first time and drove for one of the 3 long sections. It will be a rush to get into the driver’s seat from now on!

The trans-Alaska oil pipeline is an amazing feat, constructed by private funding in only 2 years with an eventual price tag of $8 billion (estimated cost: $800 million!). It pumps oil from the far north coast down to near Seward (800 miles). Much of it is underground but we were able to see a section above ground, crossing the Tanana River near Delta. Its peak flow was in 1988 at 2 million barrels a day. What was going on in that year? 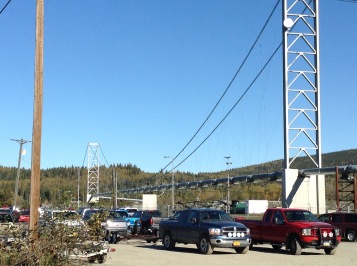 There was a rough carpark full of 4×4 vehicles and large boat trailers at the bridge/pipeline crossing and T thought: ‘All these fisherpeople? – The current is super fast, how can a boat launch?’ Apparently the motor is running while it’s still on the trailer and great skill is needed. As for the fish??? No, the boats are actually for hunters going upstream for moose, caribou, bear and whatever else.

The two week hunting season is officially on and this is the Labor Day long weekend. That explains everything and the big freezer vans we saw dotted along the highway. Fellow travellers reported coming across guys on 4 wheel buggies with rifles lying across their laps.

The terrain was different today. In the distance, the Alaska Range was blue and white, and the road straight, there were lakes for fishing and the occasional clear pebbly stream, but most waterways were glacial and consequently very fast and silted. Then as the afternoon progressed, we were in hill country, sparse vegetation but in colours of gold and purple and pink: birches and the lichen that feeds the big herds of caribou that pass through in autumn.

And all the way were those big caravans/freezers parked just off the road. This is “subsistence” hunting – a moose can feed a family for a year, we were told. Did we see 1??????

Tonight we’re in Chicken, a gold mining community of 21st century desperadoes, 100kms from the Canadian border. With no city lights maybe T will actually see the green ribbons of the Aurora Borealis, for which this area is famous. That is, if she can stay awake …midnight- 3a.m is not her preferred time.

Still on wifi lite. Intriguing that the most first world country in the world has the same issues as ordinary folk. It is sort of reassuring (in between D’s frustrations!)