The bed worked! T woke up with a smile after a good night’s sleep. Now we have 2 valleys either side of the lifted centre strip! It’s all in the physics.

A few of our fellow travellers departed around 7.00 AM – while the ice was still on the outdoor furniture and the Crans were just dreaming of that first cup of tea. We got away about 9.00 AM – middle of the pack.

Driving on the highway has something of an imperative to be at the speed limit – 65 mph. This is not really a comfortable speed in a clumsy motorhome on often rough road surfaces. But having a semitrailer with extra trailer on your back does make you concentrate!

Looking for a mid morning coffee, we turned off at a small town – Nenana – population about 300. Dropped into the Post Office to send 5 postcards to five special people, and had a lovely chat with a young man serving behind the counter. He’d come up from Titsburgh (some of you will know the joke) and apparently most of the town was related in some way. He just loved the pace of life. That leads in to an observation: the people we have met in Alaska in all situations have been, without exception, polite and helpful. There is no sense of rush and impatience (we sort of alluded to this in mentioning George and Debra in Anchorage). It really is nice – but we don’t know how many are carrying guns!

We turned off the main highway short of Fairbanks to visit a hamlet called Ester, a few miles short of our destination. Apart from getting us off the main route, it also provided the opportunity to visit a jewelry designer studio– Judie Grumm who talked about wonderful travels she had had in Tasmania.

Arrived Fairbanks, beside the Chena River and what a surprise…Fairbanks is not the desolate landscape that T was expecting. It’s in the growing part of Alaska….huge temperature range, with permafrost beneath, guarantees water to feed crops and trees.

We walked across to the Fred Meyer centre, to catch a bus ‘downtown’. Fred Meyer is a sort of Walmart lookalike. Caught a Blue Line bus, and delighted to discover that over 60 year olds travelled free. Finally, a benefit of (or for) getting older.

Downtown was, on this first exploratory visit, a bit underwhelming. Dropped into a few galleries and stores, which were mostly unimaginative, although one store would have attracted more interest if we hadn’t been travelling with weight and volume restrictions. 1960’s American urban design has no aesthetic appeal. But we did visit a museum describing the winter activities in the Interior….and dog sled races are the highlight. Mushers (the human) ride/run behind the sled team of from 3 to 6 dogs. The races are marathons over vast distances under extreme conditions and the winners become legend. And of the 101 other things to do in Fairbanks in winter (when it’s 40 below), ice fishing, ice skating on the frozen Chena River, snowmobiling, ice hockey and curling are popular. Pity we’re not here to try the list!

Back on the bus, to shop at Fred’s, to get everything we needed for the next few days. Being the only bus passengers, the driver was very chatty. She had fairly recently come to Fairbanks from Arizona, where crime rates are high, jobs are problematic… she had come to rescue her son’s dog, as he’d been deployed O/S with the Air Force. She’d stepped off the plane in February, when it’s -40 and light for only 4 hours a day and LOVED IT. Having sorted the dog, she flew home to Arizona and announced to her husband “ We’re selling and going to Fairbanks”. We’ve since learnt about no income tax, cheapish house prices and free University education for students demonstrating good grades. 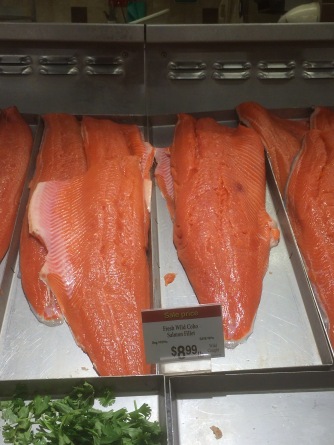 Shopped at Fred’s where the fresh fish section has fillet slabs (wild salmon and halibut) as long as an arm. Tonight is halibut (twice the price of wild salmon). Fresh food section is fabulous but since we’re 2 nights away from Canadian border, can’t stock up.

By now knackered, so a quick appearance at the group happy hour and then into the van for risotto.