The past 6 weeks have caught up with us – a 1030 AM rise. Today was going to be a rest day, and what better way to rest than to visit Walmart? We’ve pretty much sorted out Vancouver’s public transport system, so were able to do transfers etc. easily to get there. The system, by the way, is terrific, and has regular services even on weekends.

Coffee at Starbucks in the absence of anything else on offer – and it was (surprisingly) very good. Will have to reassess our prejudices! On the return trip T walked ahead as D ducked into the local centre looking for a barber. As she toiled up the hill, pulling a wheeled bag, a car with two women in it stopped to ask if she was alright and whether she needed help. This is amazing!

By the time we got back to our temporary home, it was time to walk to the beach in the late afternoon cool air, although the sun was still shining. Passed the sporting fields and a women’s soccer game: these fields have had almost constant occupation since we arrived.

Fishermen in waders were casting nets into the sea from the beach. A bit further on, the pier has been renovated since its original construction in 1912 as a ferry terminal and now is just used for recreation and fishing. 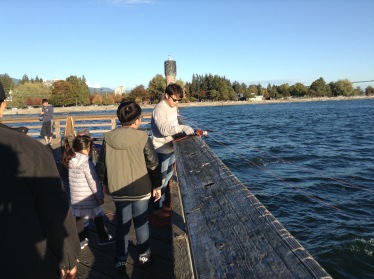 There were quite a few fishermen (and women) trying their hand: and all appeared ethnically Chinese. Crab was the preferred catch. Signage described the regulations re size and hours for catching; no nighttime crabbing! And again cooperative: one fishermen went out of his way to provide advice to a fisherwoman on baiting her hook, and the right hook to use.

He later introduced himself to her, so could well have been fishing for a different sort of catch. Not much caught that could be kept legally – one chap was cleaning some fish as we departed and D looked, looked again at what appeared to be trout, and asked what kind of fish they were. Trout. The fisherman had been to a local lake, caught the (undersize) trout and then come to the pier to fish some more. He was sensibly cleaning the fish there rather than doing it at home.

A walk home via esplanade shopping (restaurants mostly) and real estate windows revealed the $ necessary for West Van….1 bedroom/bathroom apartment….$500k! 4 bedrooms/3 bathrooms…..2.5 million+. This confirms some overheard conversations about real estate while travelling the buses. We won’t be buying and staying on, much as we have come to like this city and its people.

One thought on “A Slow Day”