The day started with the finish of the 2016 AFL Grand Final. D bought a pass on the internet, checked with the hosts on the use of their plan (all go) and was set to settle in – but ERROR messages kept appearing! Changes to settings and move to Chrome solved the problem and he was able to watch one of the best games of finals footy he’s ever seen. D would have been happy for either very good side to win, but was barracking for the sentimental favourite, who got up.

Notwithstanding, T had a plan for the day – off to the Granville Island Markets. Another easy bus trip into town, a change of buses and to the island. A couple noticed us consulting our map and asked for advice on how to get to the markets – the blind leading the blind. A local lady sitting with us said she was going there, so she had an instant pack to follow her – the pied piper of Vancouver. She got us to a coffee shop, with guidance on the way, and left us to our own devices. 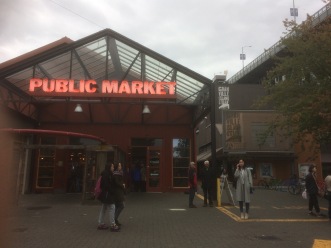 T & D split for an hour to do their own thing, after a coffee of course, wandering separately around a market which was a cross between Paddy’s (but smaller) and an artisan/craft market. Some lovely craft and some fresh produce (veges, cheeses, meats, fish, oils etc) and an exhibition at Emily Carr of alumni folk. Footsore, we headed back on the buses mid afternoon. Rain held off, with just the occasional sprinkle to push up brollies and freshen the air. Note the dull photos!

We have commented on the politeness and what seems to be the innate good manners of the locals, here and elsewhere in our north American travels. Alas, this does not always apply to some of the (obvious) tourists, who display a lack of personal space and are quite often simply ill mannered in their need to occupy the prime spot for longer than is reasonable to do so – usually to take endless selfies. In a few instances while we were touring we noticed that some ignored signs to stay on pathways protecting fragile areas, or climbed onto walls or rocks to put themselves in situations that were quite simply stupidly dangerous. 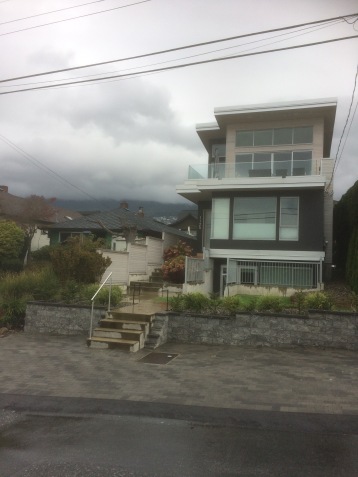 Finished the afternoon with Facetime chats back home and an uplifting movie on Netflix. Settled in for an early evening in our very comfortable and well appointed apartment (that’s us in the ground level part, with the hosts above us in the two upper levels). It is avery steep climb up a hill from the bus stop!