Well, maybe not so stable. T’s ‘bug bites’ are still not responding to the over the counter drugs, and other possibilities have been suggested by the more medically trained members of the group. So, the Crans were the first out this morning – that is a first – and off to the Emergency Department of the local hospital after a breakfast of American baked beans, which is a last.

The hospital was pretty efficient, even though the admissions clerk was learning on the job. Not much of a queue, but still a wait – it is part of the experience. But the upside is that it has provided free the best, quickest internet service since leaving home, so lots of updating achieved while poxy T spent a few hours with the medical staff.

The diagnosis? Yep…Shingles left side of face/head. Drugs might help if caught in the first 72 hours, but since T is at 96 hrs, so who knows? Scripts in hand (and advice that it’s ok to continue hanging out with old fogeys, but steer clear of under 7s who are not immunised).

Then off to Brett the optometrist to check on that thing on the left eye. He did all sorts of tests on both eyes – finding that the vision in the affected left eye was better than the unaffected right. Anyway, T got a good report from all that and hopefully things will improve in a few days, aided by more drugs – and a hefty contribution to Canada’s health system (thank goodness for travel insurance).

The visit gave us an opportunity to stock up at the Canadian equivalent of Walmart – Superstore – it was where the optometrist was based. Prices very similar to Oz, although fresh produce seemed much cheaper: the most important item, potatoes, were $1.27/kg. BTW, Canada has gone metric, which has been a bit confusing on the road as the metric speeds signs have to be converted into miles/hour to read the speedo. It’s not a hard conversion but does take a little bit of time at our age.

A great coffee at Midnight Sun Café, recommended by optometrist Brett – and it was good, although two extra shot espressos with a bit of hot water on the side (Two hot waters? No, we’ll share one. You sure?) caused some confusion. In the end we got short but strong Americanos – what we were aiming for. Coffee orders continue to confound.

A visit to a First Nation Cultural Centre – an interesting video highlighted both the similarities and the differences to the experience of our own indigenous people. There seemed here to be a better sense of First Nationhood, and for it to be an integrated (in the best sense) and accepted part of Canadian life. That impression is, of course, based on just the limited exposure we’ve had – there are sadder stories in the broader context.

Our tourist guide mentioned a rail trolley ride that took about an hour along the waterfront. That sounded like a good way to finish off the day, so we duly went to sit at the rail stop. No trolley, well after the appointed time. We felt a bit like the travellers waiting at bus stops in certain homes. The booklet said the trolley operated until mid-September, but when we later passed the depot it was obvious that mid-September falls earlier up here.

On our way back to the RV Park we dropped into Miles Canyon. The canyon was named by an Army officer after his commanding officer – perhaps as a career enhancement attempt? We thought the Yukon River was fast in town: here it raced through. Signs advised against jumping in due to the fast current and undertows: we wondered how many local lads (it would only be the lads) went in as a rite of passage? The deep aqua green of the clear water, and the white of the breaking waves (giving the city its name), contrasted with the brown of the river bank cliffs, and the red of the lichens covering the rock. 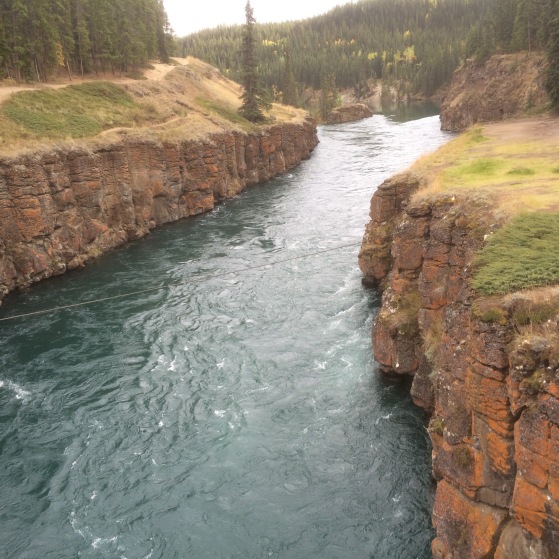 Poor internet last night and again tonight, so photos will have to wait.(Updated 11 Sep)

3 thoughts on “Stable in Whitehorse”