A long day ahead, and steady, sometimes heavy rain. First stop after 160 km was Teslin, a dot on the highway. We’d been advised by our tour leader to visit a stuffed animal display – despite our scepticism it was very good, with the whole range of animals beautifully stuffed and placed in realistic scenes. Apparently it was a fantasy of an accomplished taxidermist, complemented by a German diorama maker. Anyway, we can now tick off that we’ve seen all the Canadian wild animals, albeit none of them alive. 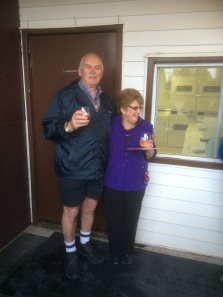 Happy Hour tonight celebrated one birthday, held over from yesterday, and one 50 years of marriage anniversary.

Watson Lake is known for a few things, one being its Forest of Signs. Started by a US Army engineer working on the Alaska Highway in 1942, it has grown to include more than 75,000 signs from around the word, although most that we saw, before being driven away by more rain, seem to be from the US & Canada. 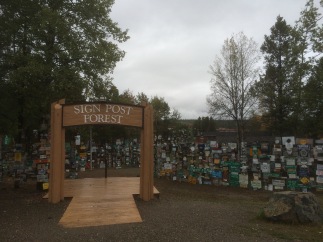 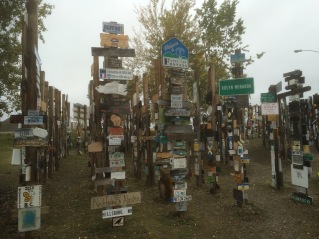