Skip to content
HomeAdventures and some of the other sorts…

A peaceful night, although the 8 AM start is just a bit early after our rather late finish: we seem to have lost that ability to party all night and bounce back next day.

After buffet breakfast, and being an organised pair, we book for today’s visit in Tromso and tomorrow’s trip to North Cape. It all went smoothly (the staff had changed, and D avoided Dad jokes) but nevertheless: Mistake 1!

We have four afternoon hours in Tromso and it seems a good option to take the ‘City Sightseeing Excursion’, all packaged in a timely way. Three attractions are included: the cable-car (sourced from Switzerland, as ‘the Swiss know how to do it’ our guide told us), the Arctic Cathedral and the Polaria centre. Mistake 2: We dress for cold and not so well for damp. We board the coach at the terminal, along with the group of talkative and loud Americans who shared their conversations with everyone within a 2 km radius and arrive at the cable-car entrance to find Mistake 3: a queue of at least 45 mins!!!! We’d seen similar in Bergen, when the cruise ships were in and had dismissed that as a bad joke.; here we were in Tromso and the joke was now on us (four big cruise ships were in), we were in a queue, in the open and it started to rain! Already the tour leader’s schedule was dudded.

By the time we got into the cable-car cabin, having been overtaken several times by anxious and pushy queue jumpers, there was only enough time to alight, take a snap, then get back in. 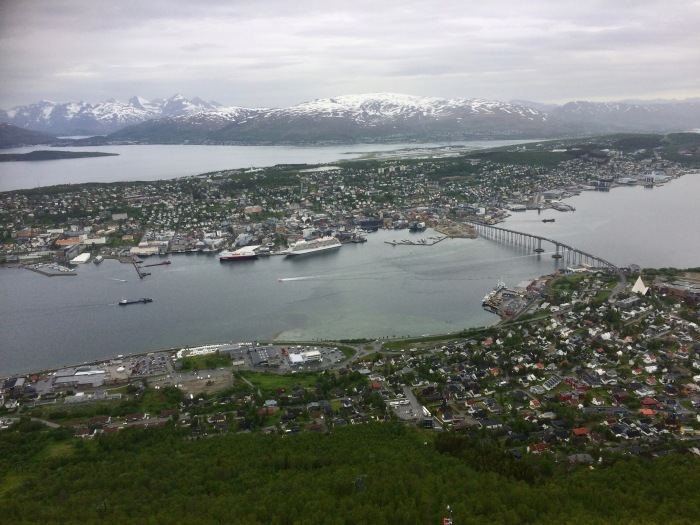 We were intrigued by the regulation-obsessed Norwegians view of adequate fencing on a cliff top! 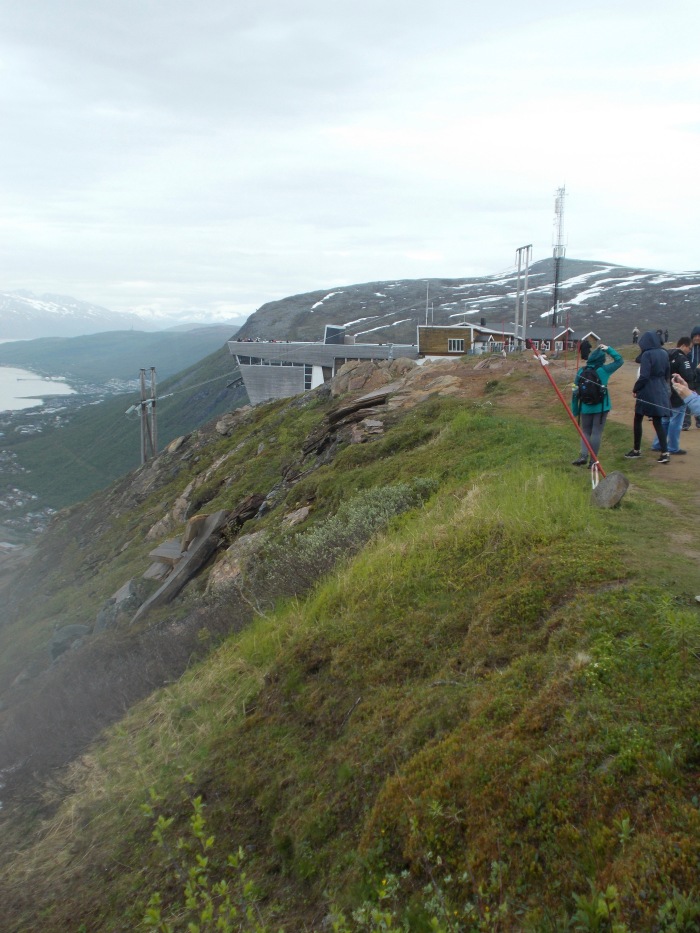 No point crying and no point looking at the bill! We arrived at the Arctic Cathedral for a 15 mins snapshot; a bunch of marathon runners was also there: tomorrow is the 30thanniversary of the Midnight Sun Marathon…Doug and Penny, where are you? 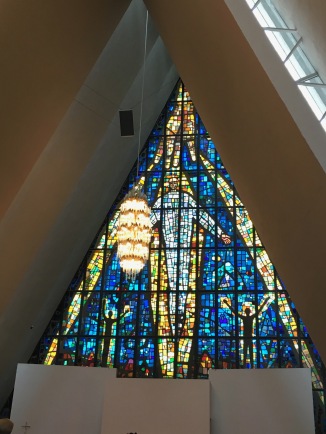 Next, the Polaria Centre where seals perform their tricks for fish – a bit sad in our view – and the theatre shows a drone-video of the Arctic, followed by one of the Northern lights. T says that she’d love to experience the lights, but…

The rain has set in, hiding the longer vista and transforming the intermediate view into grayscale. Feeling in need of a hot snack, we opt for the hamburger and fishburger… or rather, the plates of roast potatoes with burgers on the side. D, even with his ‘Viking’ heritage couldn’t quite do the potatoes justice and  for T, it was Mistake 4 , as she never had a hope. It’s perfect weather for knitting.