After yesterday’s long day on the road, visits closer to home are planned. Our target is the Lofotmuseet, in the area now known as Storvagan, on the site of the city of Vagar which in the 1800s was the location of a major fishing enterprise.

The site contains 11 buildings, plus is the start point to a 2 km historic walk. As rain threatened we decided to do that first. The ‘trail’ is aptly described: a narrow foot pad through knee high grass, with directions provided by small wooden signs that did not include any text, and were often discreetly positioned so that they were hidden from casual sight. 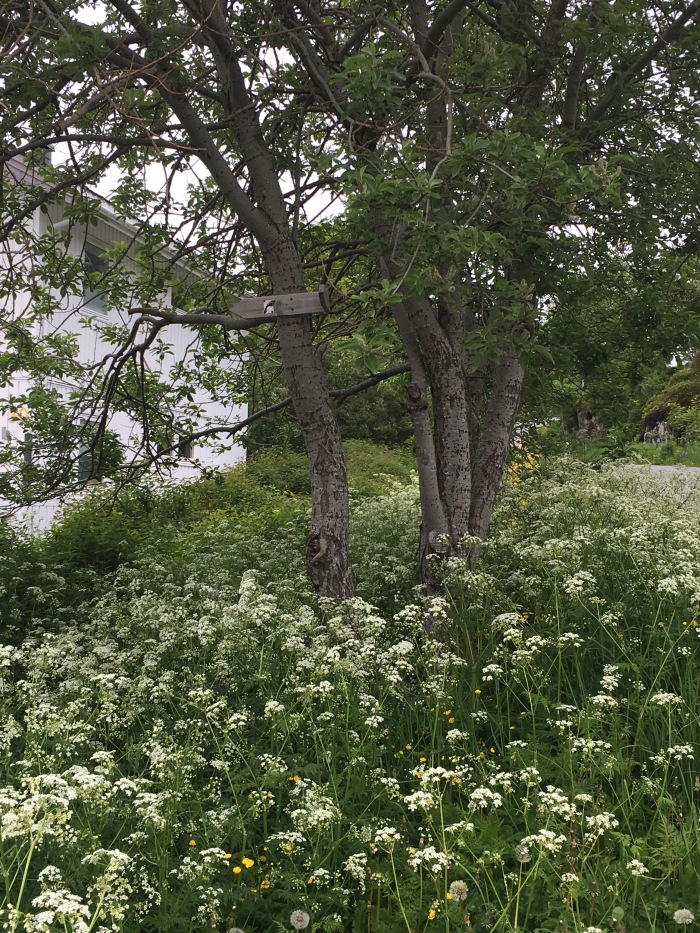 That system worked and we missed the sign to the statue of King Oystein, but fortunately met two very helpful young boys who were able to redirect us in excellent English: one claiming proudly that they were the best in the class at English; the other later told us he could speak four or five languages (his arithmetic apparently not as good): English, Arabic, Norwegian and one other we missed. We asked why they weren’t at school: tomorrow is the last day before two months summer holidays. So with a bit of help we found the king – he also scored the indignity of a large gull sitting on his crown.

The museum was terrific, telling a story of the fishing industry that made sense of a lot of what we’ve seen and heard, both here and previously in Norway, the Faroes and Iceland. The buildings covered all aspects; the original rorbuers (fishermen’s huts) were an eye-opener: 8 – 12 men sharing the space, and if you just count the bunks, that makes for interesting evenings. 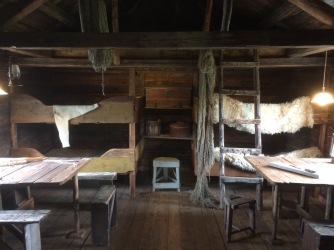 The original manor house, which has had a varied career since the last owner went bankrupt in 1901, was a wonderful contrast in lifestyle and privilege.

A shorter touring day (although 7 hours on the go didn’t seem short) had us back in the apartment by 5.30, ready to walk down the hill to Borsen Spiseri on the little island of Svinoy, which is reputed to provide excellent stock fish dishes.

Fortunately, the light rain stopped for our hike to the restaurant. D had investigated alcohol + driving regulations and, as expected, the two are not tolerated (>0.05=prison). We’d booked a table at Borsen, according to rave reviews, in order to do THE THING, ie the codfish (aka stock fish when dried).

Our Polish waiter was engaging, affirming our wine choice (cheapest – but not cheap – and Spanish) and then mentioning that his sister is currently living and working on a working visa in a Queensland city, near a desert, population around 80….yes, it’s Bedourie! Well, Bedourie is, from memory, a channel- country town on the fringe of the Simpson red desert, has very hot springs that we couldn’t immerse in, a night rodeo that we went to in 2017, and camel races that we missed by a few weeks. She is ‘killing flies’ and doing something related to bar work; he was amused and bemused that local policeman drinks at the bar and then pulls over the other customers! Sounds accurate. We shared a marinated reindeer entrée, sweetish due to the red onion marinade, accompanied by a striped beetroot shaving and  little red ligna berries, a local wild product, on a bed of rocket.

Then came the 2 cod dishes: Royal & Risotto. What to say: yes, the fish flakes beautifully, white and succulent, but the flavor is SO SUBTLE. Accompanied by stronger flavours from the prosciutto (Royal) and chorizo & mushroom risotto, the meal was very nice but…We know that we prefer bigger flavours. Seems like big effort: hydrating the dried fish for a week, changing the water daily, then adding a bit of salt before cooking.

However, as an ecological whole-food source over many centuries, it works and D was able to enjoy another serving of steamed, buttered potatoes. As we walked home, we thought of the flavours of bream, flathead, leatherjackets, trout…that we enjoy without big accompaniments. What would Norwegians make of T’s fish curry (+100 spices)?

There was a small group of three at an adjacent table – D thinks two were American and one Canadian. From casual snatches of conversation, he would like to add another law to Godwin’s Law but hasn’t yet come up with a name (Pelosi’s’s First Law?). The law is similar: As a discussion on problems in contemporary US or world politics grows longer, the probability of  Trump being blamed approaches 1.

One thought on “Exactly where are we?”