Today was to be ‘Shakespeare’ at Kronborg Castle, at Helsingor (Hamlet’s Elsinor) but it turned out to be less about the Bard and more about the tensions between Swedes and Danes in the 17thcentury. At breakfast T wondered whether a tour of ‘The Bridge’ was a possibility, but then dismissed it. It seems to be offered as a day with a driver who talks….and some reviews referred to the downside of that. T is used to a driver who doesn’t talk.

So, armed with the lunch pack and umbrellas for that forecast afternoon thunderstorm, we were on the bus & train again, by now quite expert. Helsingor township felt instantly different from the city; much older, quieter, quainter.

A coffee at a special place kick-started our morning excursion. It was quite different from yesterday in hipster-ville – we reckoned today we reduced the average age by a couple of decades!

A walk around the harbor toward the castle delivered the first highlight, the trapeze girl hanging from the boom of a ship practicing her stuff while a photographer filmed from beneath and a young girl (6 years old?) enthusiastically clapping. Reminiscent of our Grant grandgirls in Melbourne a few summers ago…

And some interesting and provoking artwork, part of the local council’s program – the message is simple.

The castle is indeed a magnificent thing, occupying the headland, staring across the sound at Sweden.

There were a number of sections to explore, starting with a guided tour of the dungeons from where 400 Danish soldiers suffered through a major siege (17thcentury) and 3,000 Swedes came across the frozen sound and tried to take the castle. Interestingly, the horses were quartered on the first level below ground, with ventilation chutes, with the soldiers on the level below them, without ventilation.

Inevitably, with dwindling supplies, military plans ignored, and fatigue, there was a compromise/surrender/treaty and Danish territory was reduced with a ceding of  some of the coastal territory to Sweden. A ‘law’ still exists apparently, that allows a Dane to beat a Swede who comes over the frozen water, with a stick! T was reminded of the tension between the 2 nations over the building of THAT BRIDGE.

We were further advised that the shifts for the soldiers were of 24 hours and if one fell asleep the punishment was death by firing squad. There were less dire punishments for lateness, drunk on duty and the many other misdemeanors that soldiers commit.

King’s Kitchen, of course, was on the ground level, and very comfortable by comparison, unless you were the cook and had to sample all the King’s food to make sure it wasn’t poisoned. 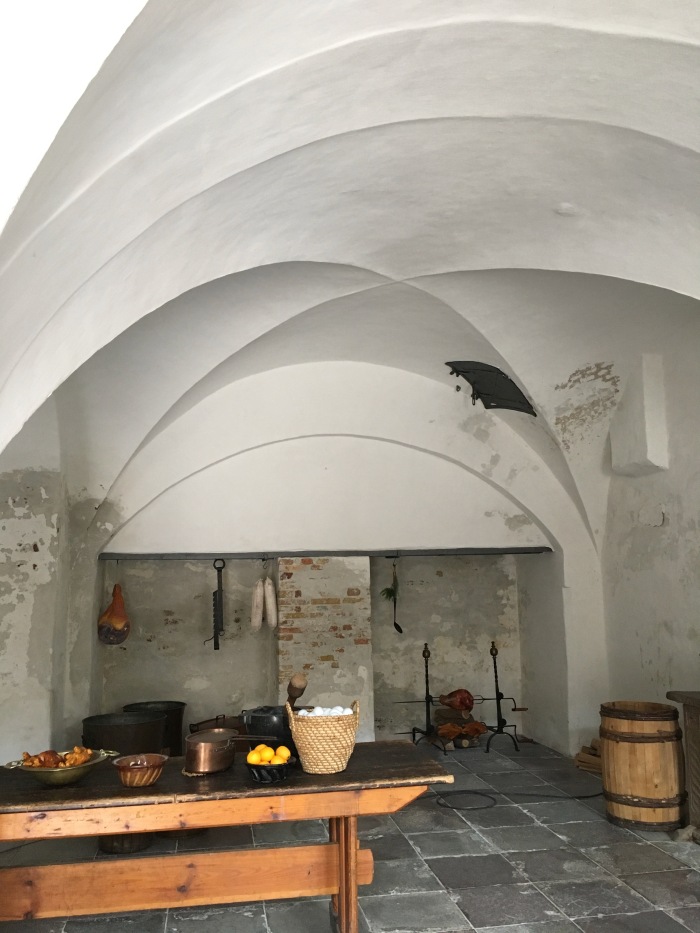 The focus on Shakespeare was not what we expected. Instead of real segments from Hamlet, there were hammed up music-hall style-moments from scenes, with 21st century embellishments, in order to amuse and engage the paying customers.

One line was delivered correctly: ‘‘There are more things in heaven and earth, Horatio, than are dreamt of in your philosophy’ but out of context with what followed. We were a bit dissatisfied with this approach, so we undertook our own castle discovery: The King’s Kitchen with its curved ceilings, the Tower delivered fantastic views, the King’s Tapestries were magic, and therein were the trapeze artists again!

The tower, threatened 145 steps – we ascended, and there were.

But the views were worth it…

Alongside many huge aggressive anecdotes, the Chapel, and the schoolkids on their excursion were having a bit of fun. 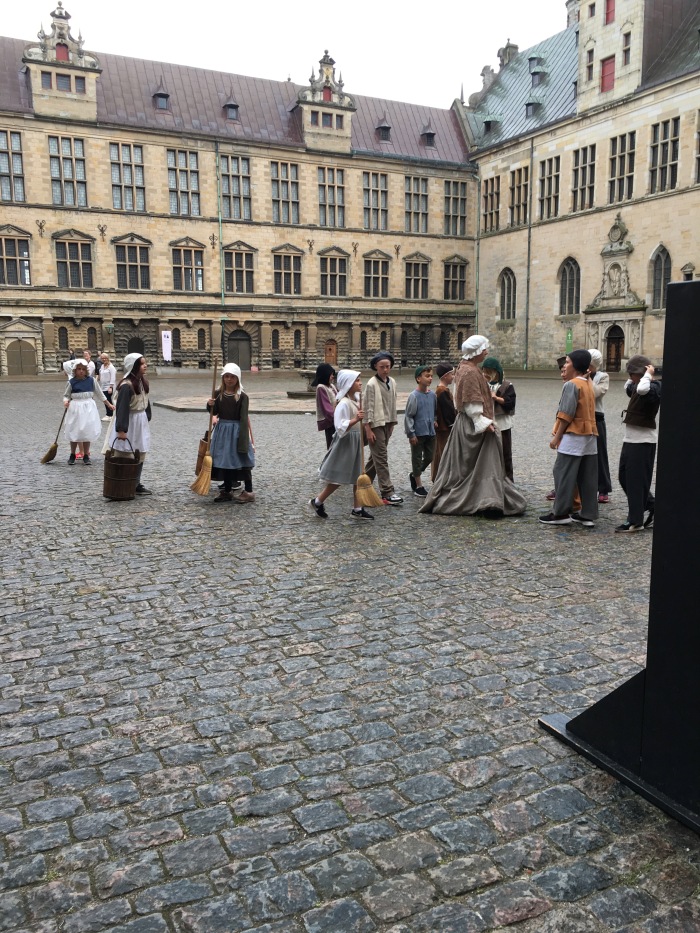 While we waited for the duel scene, a bunch of visiting youngsters were having their own duels at the courtyard fountain.

It would be marvellous to attend a Shakespeare Festival (August) at Kronborg.

Being a Monday, we discovered that the Maritime Museum was closed, as was St Maria’s Church in Helsingor but the afternoon only had time left for wandering through the medieval streets, admiring the preservation of the ancient gems, ogling some of the art work and salivating at the produce, 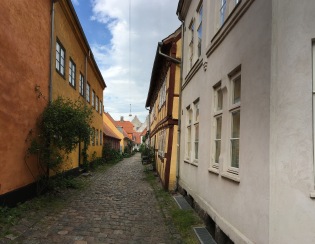 ………and finally stopping for a beer (they weren’t both hers). The plan was that these would help us doze on the hour long train trip back to Copenhagen – we hadn’t reckoned on the young family with two lively little girls to keep us awake with their games. It was just like being at home.

At 1730 the wine shops either side of the pub closed their doors and then set about covering and locking their front windows with security screens. The ferries going to and fro across the sound (only a 20 minute ride) continued to load and unload passengers and vehicles.

But we did discover that political commentary knows no boundaries. 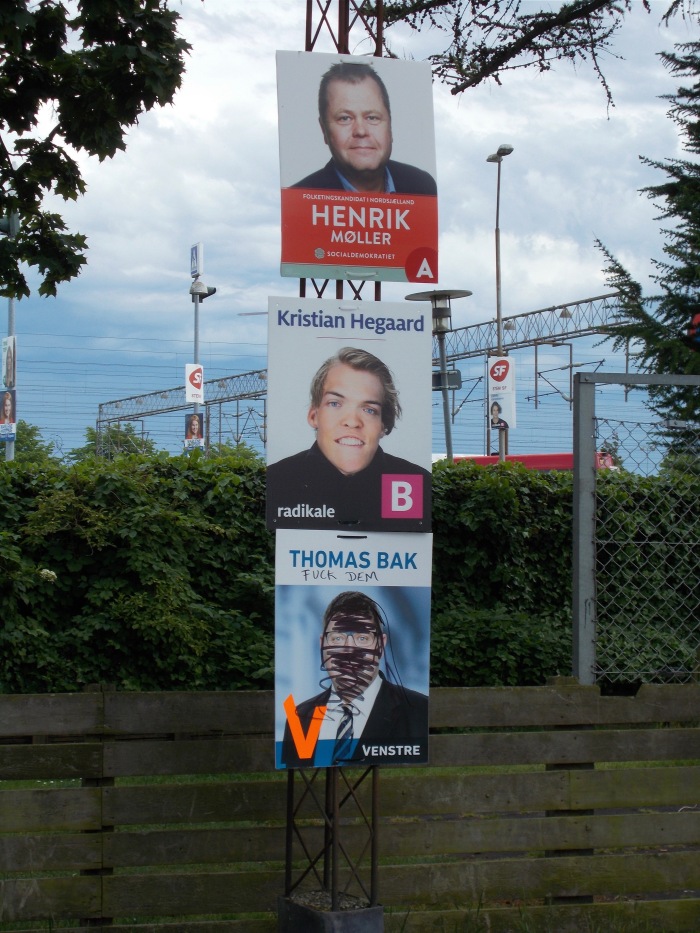 This was one of a few – apparently someone doesn’t like Thomas – and can’t spell, which might be an indicator (yes, we know its probably a Danish word).

And so, perhaps the last word to Will: ‘We are such stuff as dreams are made on, and our little life is rounded with a sleep.’

2 thoughts on “The play’s the thing”