Amazing how a proper sleep is so restorative and the day looks fine without a wind. Breakfast recommendation from Fiona was followed up…2 bus rides, with D moving the map 90/180/360 degrees but finally getting us there. We passed a fairly large procession of marchers carrying the Faroese Flag – the Merkio. We don’t know whether it was a protest, a demonstration or just a show of pride. 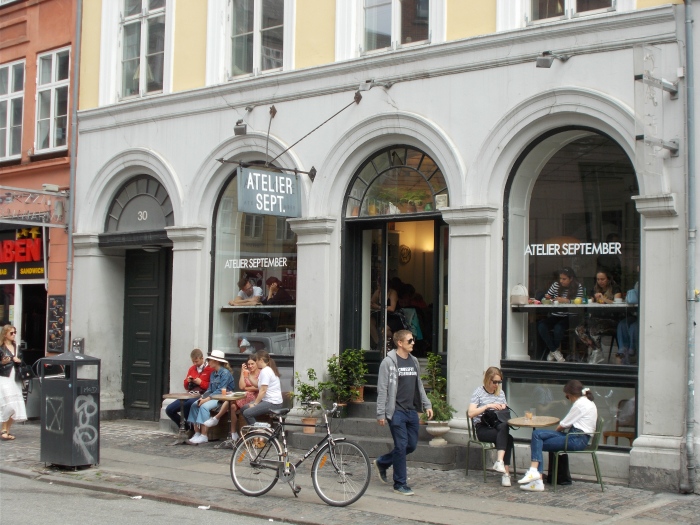 Stepping inside Atelier Sept., we altered the average age immediately by at least a couple of decades, although we figured we at least qualified as hipsters. It seemed to be a known spot, all seats taken. We had a ‘green theme’ breakfast and commented on how we are ‘yesterday’s people’; couldn’t help but overhear surrounding conversations, conducted between consultations of smart phones, and judging the lifestyles of other customers. At the same age, what were we doing/thinking? T referred to what happened in the ‘olden ages’: D replied that was us! 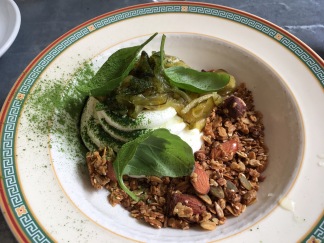 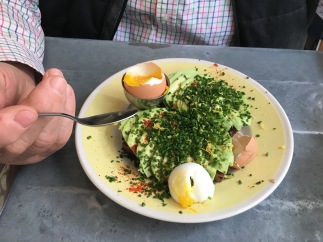 A walk toward the ‘postcard’ area of Nyhavn showed that thousands of our friends were doing the same on a glorious summer day. 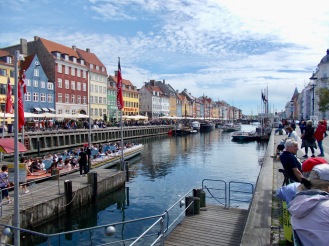 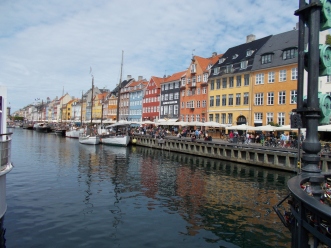 D noticed something odd at a trash & treasure market stall, while T found a knitter and observed the poncho design, confirming a measurement from wrist to elbow (an Icelandic ‘ell’, roughly 18 inches), so she can start her recycled-wool project. 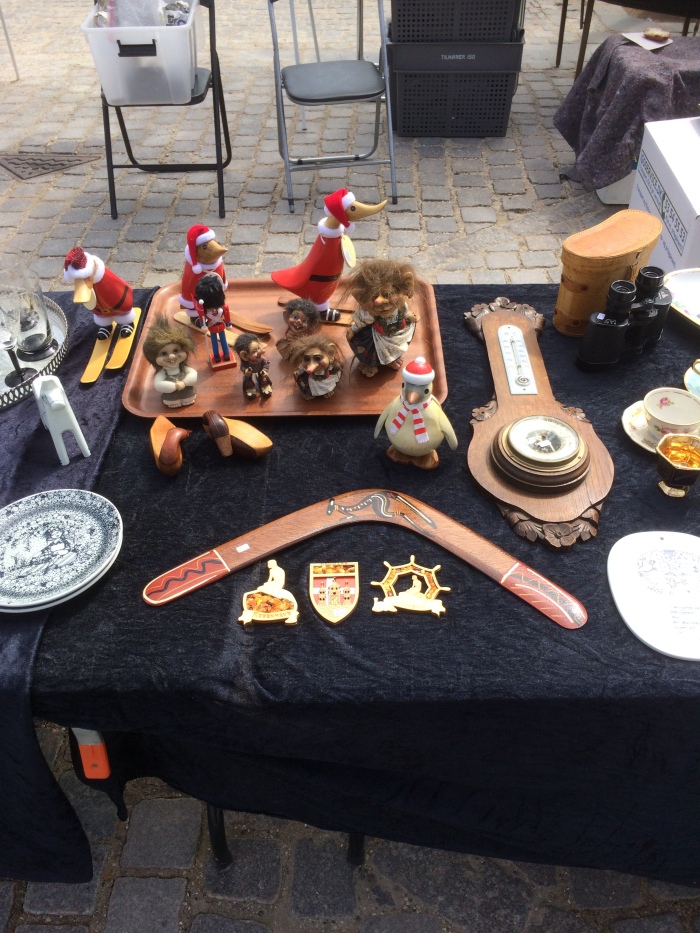 Talking about trash and treasure, the rubbish on the streets is noticeable after the almost spotless Iceland and Faroe Islands, where litter was a rarity.

Bikes of all sorts everywhere, riders mostly without helmets, requiring lots of situational awareness because there were also no bells or warnings, nor slowing down. D did see one older rider (deliberately) brush a young man on a foot bridge, no doubt to send a message. Bikes with a box in front were popular for carrying kids: T did see one with the front of the box cut away so that Grandma could step in and out easily and have a front on view as she was wheeled about.

Moving away from the crowds, we followed the canal path and spotted some possible vessels for you, Ian. It seemed that Puff either had a blockage somewhere or was having a scheduled pump-out.  Even the name was an omen, given one of our later destination today. 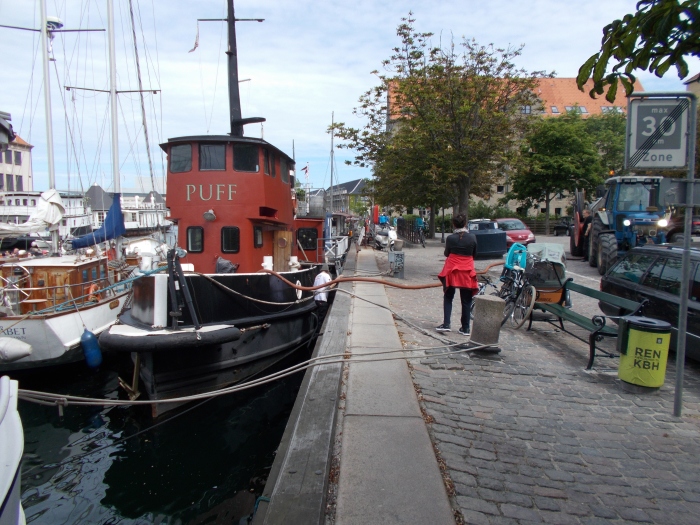 T thinks the other vessel needs too much gardening maintenance. And there was an unusual stretch where people sat relaxing in deck chairs…..viewing other people dining across the street. Sort of Brighton Beach without Brighton or the beach. 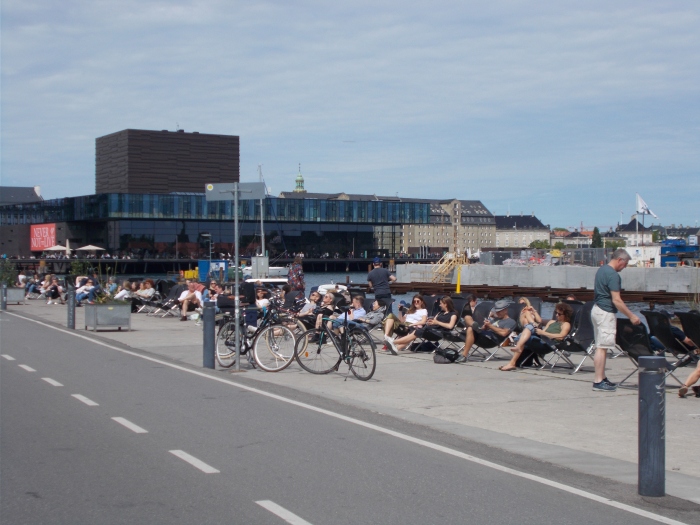 Found ourselves in Christiania (again with lots of friends). T was hoping for a herbal foot-fix but the economy seemed to be based in only cash; interesting how time changes an anti-capitalist movement into a new form of capitalism. Either one of the statues would fit perfectly into our place? 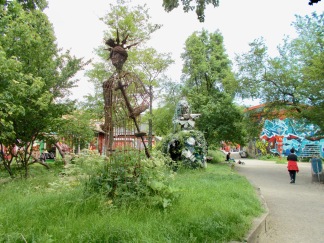 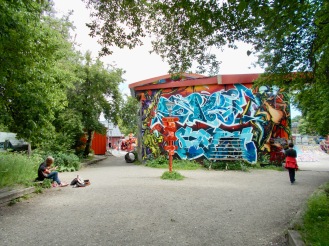 The skate park was deserted but food, beer and ‘medicinals’ seemed to be doing brisk trade. There are no photos of that area, as photogrpahy was banned. Who would have thought: rules? 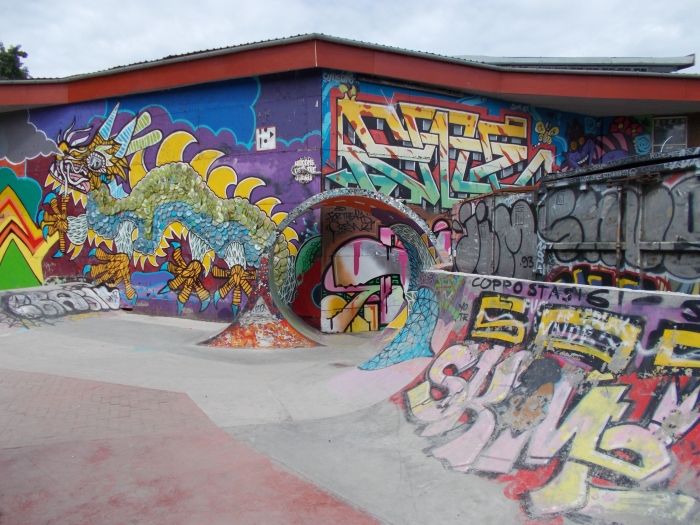 We did step into an establishment with signage for organic cakes…but cash only! 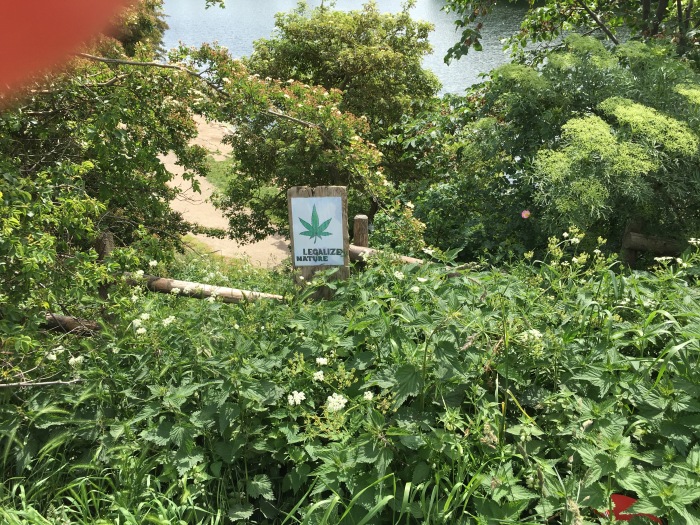 A stroll by the canal in Christiania took us past a dwelling where the pooch was reviewing the paint work from an upstairs window. On speaking to the painter, he said that it was actually a half-shade too light for his liking, and in a season or so it will have lightened even more. 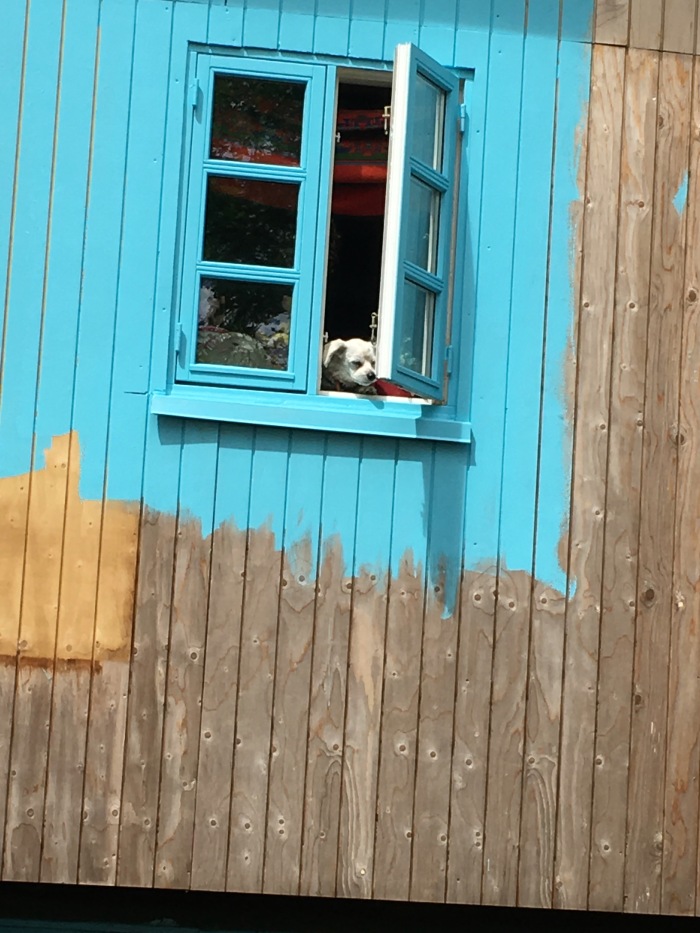 He seemed to be having a good day as it was beer o’clock, seemingly taken with some other substance he was smoking, the sun was bright and he was taking a break from the paintbrush…The canal and the treed walking paths, providing welcome shade, were a serious change from the Faroes and how about the romantic duck (Eurasian Coot) taking a rose to his partner? This is a true story. 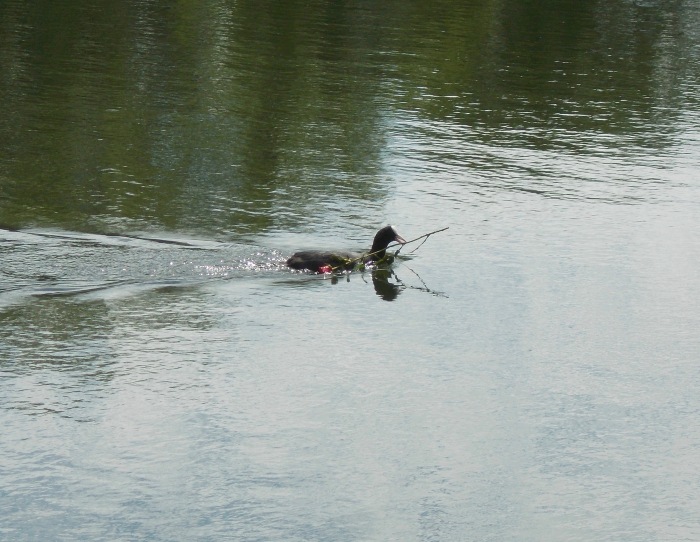 There was some kind of memorial a good distance away, where flowers (old and new bouquets) had been left. T asked some walkers if they knew what it was about…’No’…and then we spotted the bird, following him to his nest, where ‘She Coot’ was sitting in state hidden in the reeds, surrounded by the flowers he had brought her. So romance is still alive. 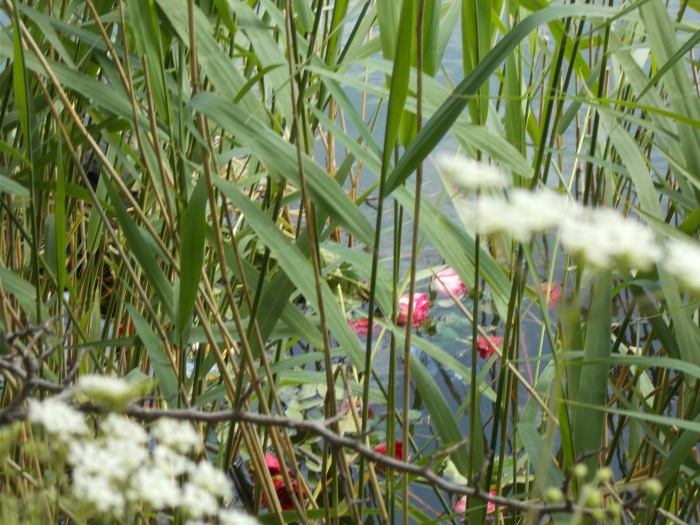 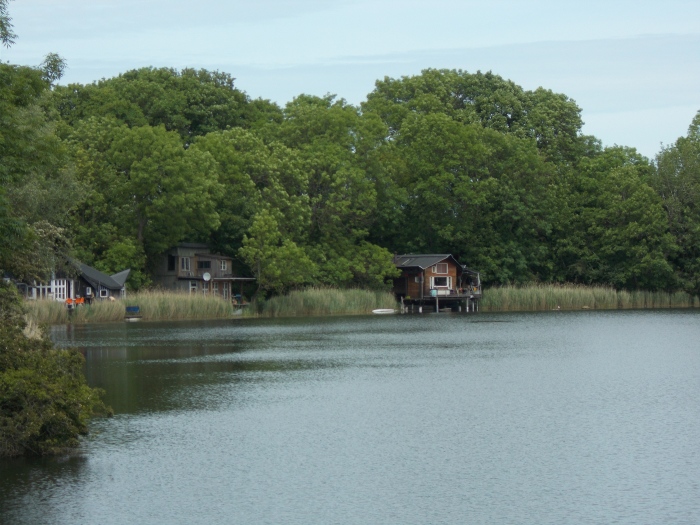 Time for some ‘feet-up’, so bussed back to apartment, passing through a residential complex where the beach and water beckon the locals on a warm afternoon, but we’re a bit doubtful about how the canal tides work, and more particularly how clean the water is. 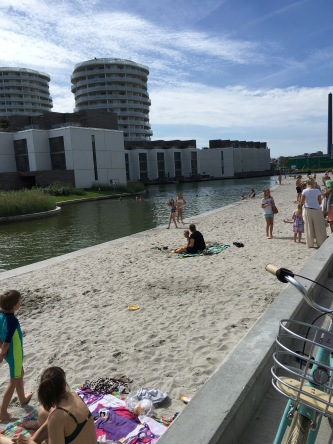 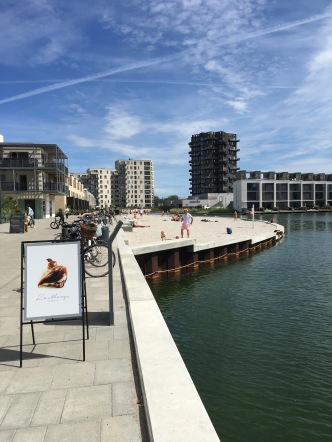 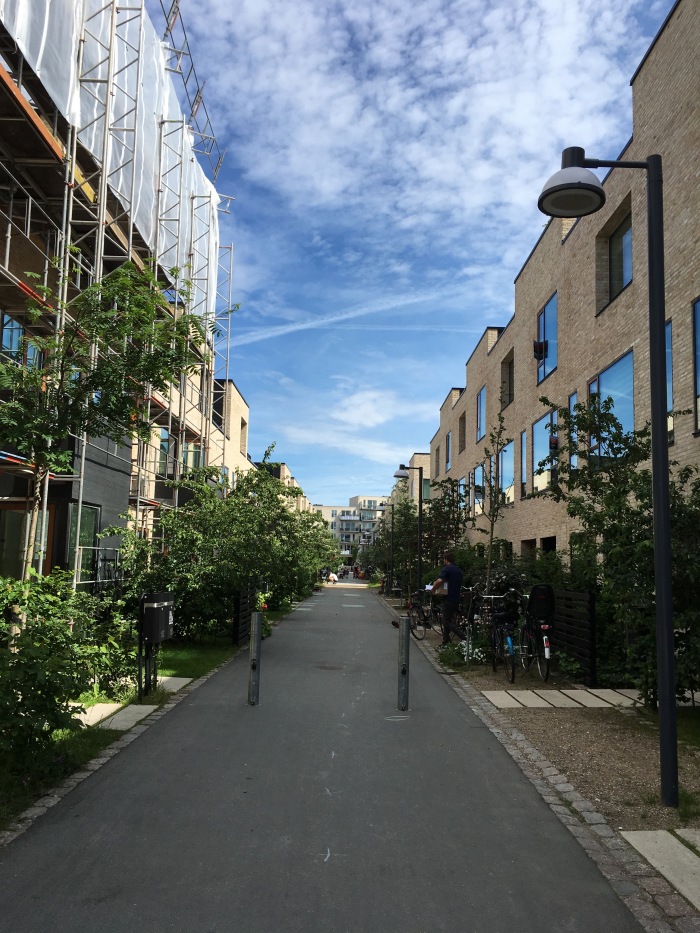 Lunch was another nice baguette with cheese, silverside, tomatoes and avocado (more hipster food) & then a bit of ‘feet up’ before heading out again, with map and new bus routes. D specially wanted to see The Little Mermaid, so we did just that. 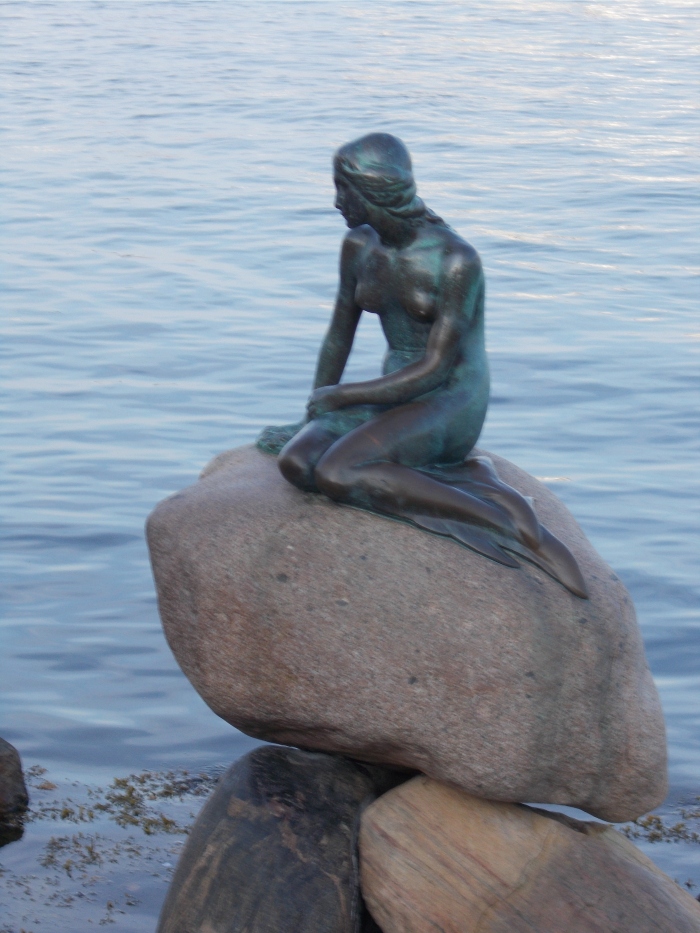 She’s small and rather sweet but the best part was that by 7:30pm, we weren’t battling the crowds. It was a beautiful mild evening stroll, returning via the Kastellet (an old military fort with ramparts, still used as a military establishment). We could walk through and found a recent memorial that was simple & dignified. There are three spaces: 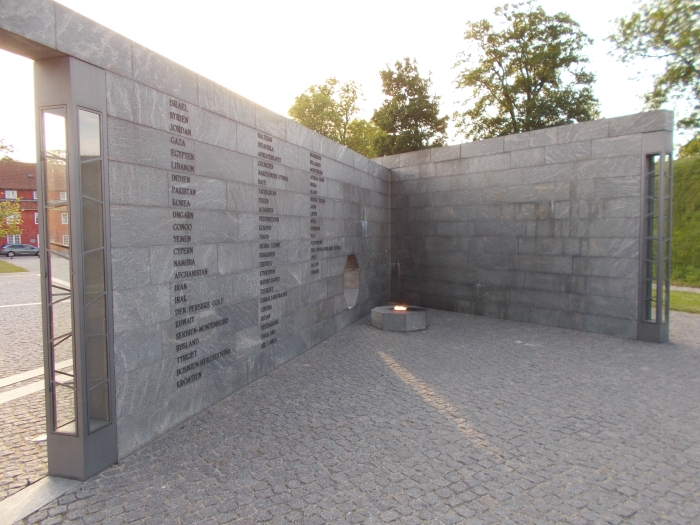 Then back to our digs for a soup supper. A lovely day. 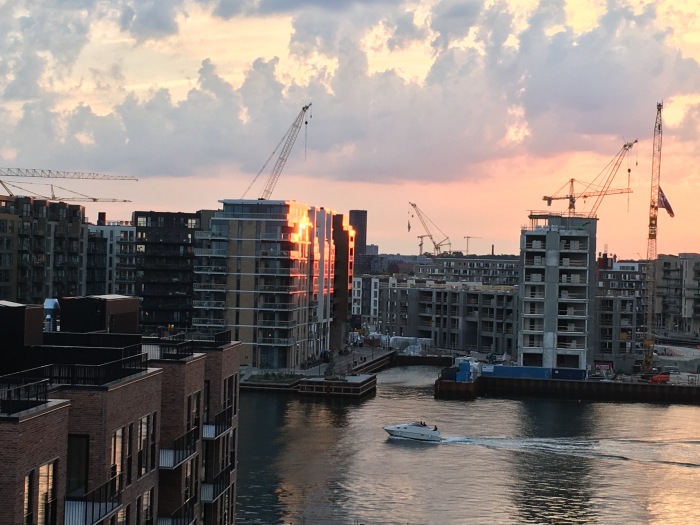 2 thoughts on “No hash without cash”