We’ve become accustomed to the presence of motor homes, and caravans are rare, so this morning’s neighbour was worth another look…fancy, pinot to go! thought T.

Time to head north to Queenstown – about 180 kms. A coffee stop at Five Rivers, which consisted basically of the coffee shop, but featured on the map. Later towns, much bigger (with at least two coffee shops) didn’t make it on to the map.

Then we hit the bottom of Lake Wakatipu.

Queenstown is the adrenalin capital of NZ and we arrived for a double shot as it was Q Marathon day. We arrived at about the five-hour mark, so some runners we saw were a bit slow, but D in particular was happy to admire their effort and accept the road delay due to bridgework and runners crossing. T had the wheel and D said ‘Just keep going, through the town centre’…well, she did, past the throngs queueing for presumably free hamburgers, and the closed off side-roads. There was nowhere to turn around, so toward Glenorchy we went. The road wound along the lake and of course the next marvelous mountain/lake vista was upon us. T thinks ‘you just can’t get enough of these views’.

Arrived at 25 Mile Camp Creek campsite mid afternoon, to find just one other camper, so selected a good site overlooking Lake Wakatipu. After an amount of jockeying into position, we were set, so T decided to go for a walk …………… and found that someone had been here before us.

Two hardy swimmers braved the cold waters of the lake, but didn’t stay in for long! 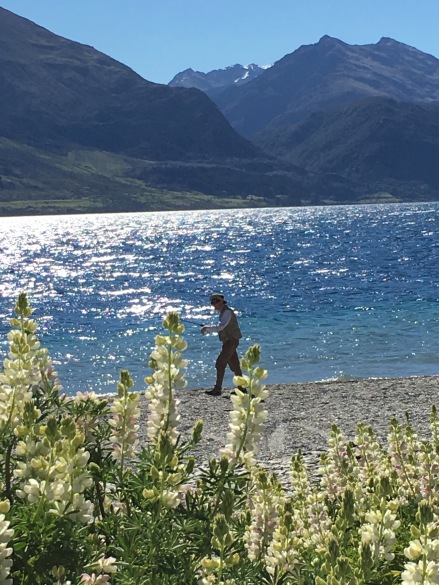 D has finally taken the plunge, got a one day fishing licence online, and began to beat the waters of the lake with the successful lure from the Patagonia trip. One strike, but D was so distracted by looking at the view (and perhaps not really expecting it?) that the fish managed to get off before the hook was struck.

A few others also decided to take the plunge and ventured into the water in swimmers…at 10 degrees all year round, it’s hardly attractive, but to each his own…

Saturday evening in sandfly central and D is thrashing the lake one more time……same result. 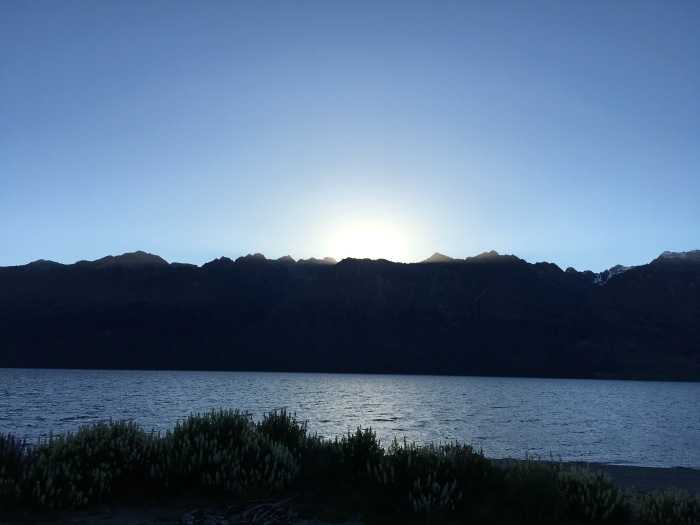