A wet day in Canberra to farewell us. Our dear friend Keith arrived early to drive us to the airport, to be there well ahead of time. As always happens when you plan ahead, there were no queues and we entrusted our luggage to Virgin and Air New Zealand, hoping that both bags would arrive at our destination: they had worked together on our trip to Norfolk Island to ‘misplace’ T’s bag for almost a week! Having arrived with plenty of time to spare, the inevitable happened: our flight was delayed by an hour. This hour was then taken off the time we had to transfer to the international terminal, get through Immigration (oops, Border Control Force) then through security – usually a long drawn out process in Sydney. But the gods were smiling on us – we whisked through in record time, the only worrying moment being when D was asked to step out of the quick line and be processed by an officer. Apparently the electronic screening didn’t like the look of him (not really surprising).

So, on to ANZ for the two and a half hour flight to Christchurch. By 6pm we were a bit peckish, having missed lunch in the delayed flight but no meal for us, as we’d apparently chosen the miser option, so we had to then buy some refreshments to keep us going. A pie and sandwich were not as appetizing as the aroma of the chicken vindaloo, but a pinot calmed T. Arrival and processing smooth, even though D had declared an amount of fishing gear, which wasn’t inspected. The Kiwis apparently think he has an honest face, even if the ABF don’t. Into the Sumida Airport Hotel for a quick snack of ham and pineapple pizza, wedges and chips, (the sort of stuff that D regrets almost immediately)

washed down with a Pinot and CabSav Merlot. The details are there only to demonstrate how desperate we were for food.

To bed, but not to sleep. D had dreadful pain in his left hand, and his tossing and turning and moaning kept T awake – well, more awake than usual. The quake of 2011 was rumbling on (or so it seemed in a bed where every movement ricocheted). A most unrestful night.

An early start not least because our 10 AM pick up was actually really only 8 AM according to our body clocks. The hotel provided a shuttle to the Maui base, a huge activity, buzzing with people getting their vans. The sight filled us with dread – was there going to be any free space on this island?

Processing was smooth, efficient and comprehensive, so we were on our way to Countdown, the NZ equivalent of Woolworths. Stocked up (yes, including wine) and then on our way. A couple of false turns, but unlike in Alaska, none were up one -way streets.

Headed for Akaroa, a ‘French’ settlement about 90 kms SE of Christchurch. We plan to be here just one night – tomorrow a dreaded cruise ship comes in, with 3000 passengers.

We parked in a free camp area on the boat ramp – when we arrived there were five others; as the day and evening wore on, all those travellers (or so it seemed) who had picked up their vans earlier in the day arrived in dribs and drabs. It’s a bit like being in Coober Pedy again, but with a bit more elbow room. Only self- contained vehicles are supposed to use the site, but there is a great variety of rigs, from couples in the back of station wagons, families in small Juicy vans to large bus-like rigs.

The rain and wind arrived with a vengeance overnight – the van rocked and rolled as large gusts buffeted us. Still raining steadily at daybreak, so took the only sensible option: a long sleep in. The weather started to clear around 1030, and we moved into town for a quick croissant and coffee breakfast – it is, after all, reputedly ‘French’. The upside of the bad weather was that the cruise ship couldn’t off load its passengers as the sea was too rough, so we had an hour or so of quiet time until the passengers dribbled in.

The free museum was a delight, starting as recommended with an excellent overview documentary tracing the history of settlement, from the first indigenous peoples to the European explorers and colonists. And just like the recent discussion in Australia, this country was also ‘discovered’. The documentary portrayed a far easier occupation than ours, although we suspect that might be somewhat disputed. Certainly the Treaty of Waitangai was a good outcome – although the Maoris argue, with apparent justification, that the English language version and the Maori language version differed significantly when covering the issue of indigenous tribal sovereignty. This was not resolved until recent years.

Leaving town we took the scenic Summit route taking in the terrain of the 3 volcanoes that form the peninsula – a narrow winding road with barely enough room for two vehicles to pass – but the views were magnificent back down towards Akaroa and on the other side of Banks Peninsula. 50 shades of green……

Took a turn down an even narrower, steeper road into a little village called Okains Bay: it was about three buildings and a cultural museum. Another gem, with a range of displays from Maori culture to the early settlers. 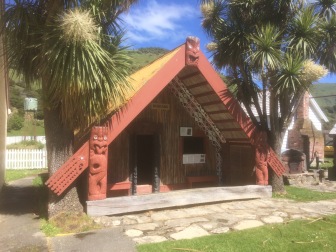 Latish afternoon by now, so after a brief stop at Little River and a quick view of their wonderful NZ art gallery, on the road to try to find that elusive free camping area. Back through the outskirts of Christchurch, then south towards Rakaia, heading towards Rakaia Gorge. The suspicion we’d had was confirmed: this was all beautifully organized agricultural land, without a single opportunity for a stealthy overnight stop! Decided to head for a little town called Methven, at the foot of the Mt Hutt snowfields, where we have called in to the campground, which is quiet and hardly occupied. Now there is only the bleating of sheep to bother us, as it is also the showgrounds. Snow-capped mountains and rushing glacial rivers remind us of the Canadian Rockies.

And it is cold.