The Painted Desert delivered a painted sunrise, then it was on the track again. 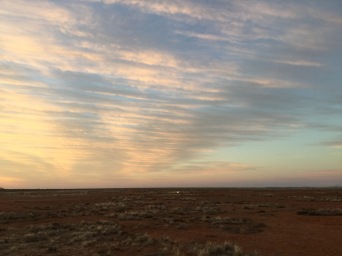 Coming through the Painted Desert was a fabulous drive, mesa after mesa, variegated colours of red, pink, ochre and the grey/green saltbush. Simply beautiful. It was an 80 km drive on a remarkably good dirt road to the Stuart Highway – something of a relief after four days of rattling along hoping everything was going to hang together.

Once on the bitumen it was smooth but pretty boring sailing with no natural features to marvel at. Pushed on to the Marryat Rest Area where we’d stayed the night in 2007, in Gloria. Two other vans, one of which was only stopping for a quick bite. T’s heart sank: the main area was filthy with rubbish, bins overflowing, baby nappies… so we opted to move about 200 metres along a dirt track to a clean spot just out of the creek bed, obviously much used judging by the number of camp fires, but no rubbish. 2.30 PM is the earliest we’ve stopped on our travels and we are just not used to the heat of the day, sweltering in high-20s temperatures and invaded by flies. We understand it’s freezing in Canberra.

By late afternoon we are surrounded by like-minded travellers. This takes us back to 2007 when we rarely had a quiet solo space.