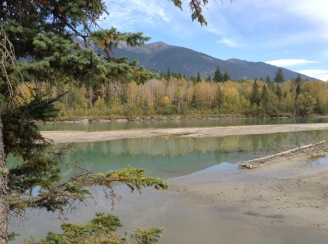 We took the long route to Beaver Falls – go past by 10 km and then backtrack. We have found that reading signs here is a bit of an art that we are yet to master. But it was worth it – a short forest trail to the rapids, but quite beautiful.

T then decided that we’d do a loop through Dunster, a small hamlet, crossing the Fraser River ( the best salmon river in the world) and rejoining the highway about 30 km later. The first part was bitumen, then a long section of well- graded dirt along a farming corridor. Dunster was a delight – the two buildings providing interest. We toured the little museum, located in the old railway office which had been bought and relocated by locals.

It was very well presented with lots of photos of valley life in the first half of 20th century, and maintained beautifully. T was particularly taken by a photo of a young woman feeding(what appeared to be ) a bear cub…sure enough that was so, and the young woman was the mother-in-law of the museum minder today. The General Store was a delight – a throw back to when a general store was a general store. The lady in charge (store keeper, postmistress, wood chopper, potato grower, etc) was happy to talk at length. It was a hard life, she said, but very satisfying.

On the road from Dunster two bird sightings: firstly, a pair of Rock Ptarmigan (remember Chicken?) then a Bald Eagle feasting on a very dead salmon in the middle of the road. It seemed a bit more sensible than our wedgies, and flew off when we appeared. 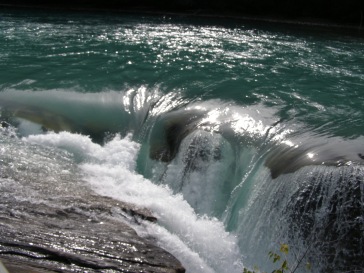 The Rearguard Falls were spectacular. Brilliant jade in colour and nature had created a glass/water display. We were too late for salmon viewing. This is the end-point for the Chinook salmon returning the 1200 +km journey from the Pacific to their ancestral home to spawn and die (late August). Only the big strong ones make it up these falls.

Terry Fox Mountain is dedicated to a young man who lost a leg to cancer and started a marathon-a-day run across Canada, only to have to stop running when the cancer reappeared in his lungs 3 months afterward – he died aged 22, but has left a legacy behind: a Canadian hero and huge sums have been raised internationally.

Then Mount Robson appears immediately ahead. What a sight!

Mount Robson Park and an afternoon walk through cedar forest along the Fraser River. The squirrels continue to delight.

One thought on “Dunster Detour”