The mattress saga continues. Last night we set up the dining table bed and T moved out of the honeymoon suite. D was able to nestle, reasonably comfortably, in the valley in the middle of the sagging mattress. T had a most uncomfortable cold night on the too short collapsed table.

After an early start to a day on which we weren’t driving, a simple repast was followed by a walk of about 2 miles to just get away from the immediate tourist precinct. After branching off the walking track that followed the highway (Alaska 3) we meandered through spruce, willow and birch woodland, carpeted with a lush moss and some sort of red berry. A particular highlight was catching a squirrel at work harvesting nuts from the top of a White Spruce – picking them off and throwing them to the ground to be collected later, and totally ignoring us. This the season for them to eat, eat, eat….getting ready for the winter.

As we started our walk we’d noticed a sign saying ‘Tent Sale’. Ah! ….we thought – let’s see if we can get a cheap inflatable mattress to support the middle of our sadly sagging one. We failed to notice that the building was in fact just a large tent – the sale was of (over priced) souvenirs within a big tent. But a kind young man directed us to an outdoors store where we bought a camping mattress, to which we have added our spare sheet and linen. A test run seems to indicate that we have found a lateral solution, applying physics and common sense. Tonight will tell. 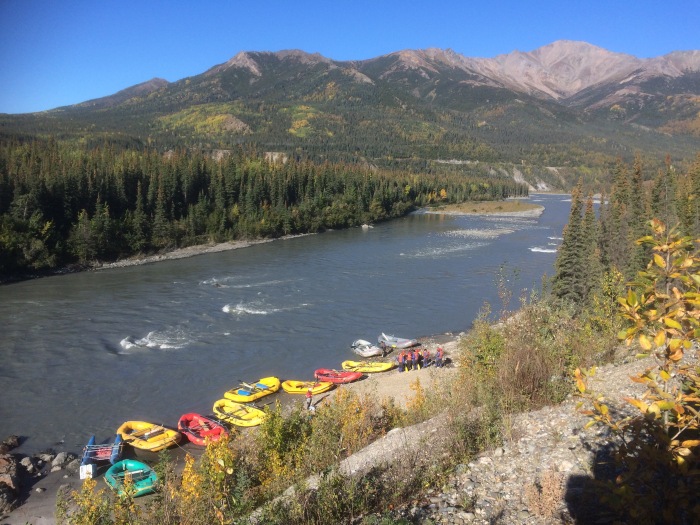 Our pre-booked afternoon activity was a medium grade white water rafting trip – about 3 hours worth. We were kitted out in $1000 immersion suits (we were repeatedly told how much they cost and warned not to damage them!) and after the mandatory safety briefings designed to scare you off, we went rafting. It was mostly a fairly leisurely drift, but with occasional splashes as we hit turbulence. Some of these were quite large and soaked the front people from the waist down, and dampened the upper body a bit too. T & D were at the back and barely got damp, but were frozen, as we all were, by a bitter headwind. But it was great fun and the scenery and environment were sublime.

Denali National park is colourful, rugged, mountainous and apparently bereft of wildlife (that means we didn’t see much). Apart from seeing 2 squirrels and a few moose, we’ve just marveled at the vistas and the sun is still shining!

Final thoughts from today…while walking this morning we passed a young guy, standing on the bridge with two female companions, looking down at the rafting inflatables. Stuck in the waistband of his jeans at his back, clearly on display was a pistol in a holster. Later, we commented on this to one of the rafting staff, who said that he always carries his revolver. T asked “why”? The reply was simple: “ It’s my right”. End of conversation.

Although we’re promised free wifi, which is strictly correct, the internet service here is dreadful, so, like yesterday, this post will be bereft of photos.(Tuesday 6 September: Now updated!)

4 thoughts on “An Inherently Dangerous Activity”

Leave a Reply to David and Trish Cancel reply