D was flicking through the TV channels looking for some actual news – there is a drought of comprehensive, global coverage on CNN, BBC, NBC etc: most of it interminable repeats of the all-consuming US Presidential election campaign. Interestingly, there is no balance: the stations are either for or against either candidate. It makes even the ABC look balanced! Anyway, the point of all that is to mention that as a break from news searching we came across repeats of the TV series ‘The Love Boat’, which is on 24-7. We watched an episode and felt we were in some sort of time warp, cruising in the Pacific in 2016 and how charming is the gentle innuendo of the old screen show!

Foghorns in a tag relay woke T very early, around 0530, after cruising gently all night. Foghorns meant camera shots would not happen and maybe glaciers would remain invisible! 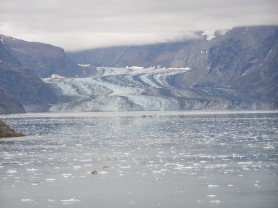 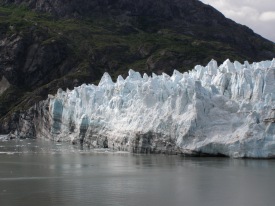 But as we steamed up Glacier Bay, the weather gods smiled, mist lifted and the cameras worked out. Tidewater and terrestrial glaciers appeared. At the top of the bay is Margerie Glacier and there we hovered for an hour, the ship swishing back and forth offering both sides a grand view of the ice wall. Occasionally slices were calved and the sound was like a thunderclap or a shotgun. Spectators went “AHHH!” 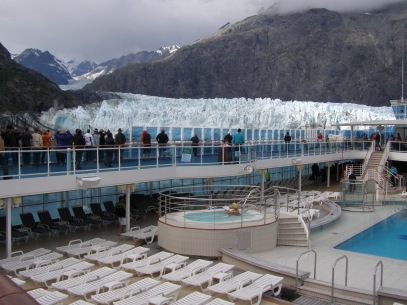 But one remained nose-in-book throughout, below ice-viewing level, warm but alone in the spa.

Today is the 100th anniversary of the foundation of US National Parks Service, so there was a special presentation in the Princess Theatre by a most enthusiastic and very fluent young ranger Caiti. Her theme was well crafted: glaciers destroy and create (perhaps in a cycle similar to bushfire, T thought). And Glacier Bay is a marvelous example of a lifecycle that has occurred in only a 250 year period. The entire bay was once land that hosted a massive glacier down to the Pacific Ocean. By about 1780 the inexorable ice mass had gouged the land underneath to such an extent that when it arrived at the Pacific, the ocean then undercut the ice river, thus dissolving it and moving in to occupy the canyon that had been created, to a length of 100 kms and in parts to a depth of 1000 metres. Today’s bay is a giant fjord, dotted with islands, coves and lumps of floating ice. Truly amazing! Time for a champagne toast to wildness (not a spelling error) and nature.

Tonight is a ‘formal’ dinner gathering of the RV folk. We’ll wear our virtual formal outfits – and our nametags.

We’re in the Pacific now and the ship has a distinct motion, rolling and shuddering. Just the thing to rock us off to sleep.

Tomorrow (Friday here) is another full day at sea, although we look into College Fjord, to marvel at more glaciers. Saturday morning we arrive in Whittier, to disembark for a bus trip across the peninsular to Anchorage, to start Phase 2 of the adventure.

To finish, of course there’s a lash up as D discovers a tear in suitcase. Always have a piece of (fishing) string handy!

5 thoughts on “Glaciers and Glamour”