Arrival in Skagway was at 0530, an event we seemed to have missed. And Skagway was indeed covered in mist, and stayed that way for most of the day, apart from those times when we weren’t at spots that needed clear visibility.

After another hearty breakfast, a walk into town via Pullen Creek. We were supposed to see teeming salmon – but not a single flick of a tail. However, it was a lovely walk along well prepared and maintained pathways. A delight was the variety of mushrooms – we had been told in Juneau about the orange speckled one that was used by shamans for inspiration – but were advised against trying it! There were heaps.

To a 25 minute film on the Klondike gold rush and the dreadful hardships faced by the ‘stampeders’. And to add to their physical woes were the scammers, exemplified by ‘Soapy Smith’, the criminal lord of Skagway, who amongst his schemes, would offer cakes of soap supposedly with a lucky $5 dollar note inside: a lucky punter (one of Soapy’s men) would win it, encouraging the suckers to buy up to try their luck. He also ran a telegraph office, offering to send messages to families: depending on the version of the story, there was either no telegraph line, or he’d cut the connection outside the office. Just like Telstra! Soapy ran the town but the citizens eventually rose up and he was shot dead by the man selected to stop his control, John Reid– but in the meantime mortally wounding his killer in ‘the nether regions’, causing Reid to die in agony 12 days later.

Talking about guns. The first time David saw this sign, he assumed, and confidently tried to assure a skeptical T, that it was an historical sign put up for the tourists’ benefit. But no, read carefully … it is a legit sign! And appeared over and over throughout town.

The film was terrific, explaining the birth of Skagway and the sudden start and equally abrupt finish of the Klondike gold rush (there was only a little gold and thousands upon thousands of mad, desperate gold seekers). Thus, the gold rush experience was mostly about the journey rather than the financial outcome. A significant trigger for us was that the scammers of the 1890s had been replaced by a more gentle, but no less active, set of scammers in the 2016s, trying to part suckers from their money with souvenir shop upon souvenir shop and tours to this and that. They seemed to be successful.

We walked through the town (a restored heritage place straight out of a movie set) and came across the house of Captain William Moore, the original founder, with his son Ben, of the town that he had called ‘Mooresville’. Why wouldn’t he? The name was eventually changed to Skagway, (shortening and merging 2 Tlingit names) by the Post office, which seemed to be a common occurrence in Alaska. Two other examples: ‘No Name’ became ‘Nome’ and ‘Caribou Crossing’ became ‘Carcross’.

Trying to find a proper coffee became a challenge, eventually finding an espresso machine at the popcorn store. Next door was a quaint, un-touristy, bookshop in which we were able to browse and pick up a couple of treasures.

Trish took off to visit ‘Quilt Alaska’ – any surprises there? – and in doing so came across a booking office for tours, amongst which she found one to the White Pass summit. Yep, we were a little suckered; we bought a mid-afternoon bus tour, in the hope that the fore-mentioned mist would rise sufficiently for us to see the views, thus getting a feel for the terrain that the stampeders had faced.

So, on the bus at 3.15, driven and narrated by Monica, a larger than life guide, who was surprisingly calm and measured when not performing as a rough, tough Alaskan (which she apparently wasn’t). The tour took us to White Pass, and to the top of the mountains 20 miles from Skagway, which was only the start of the hard and hazardous journey the stampeders took to the goldfields. We were told that many perished on this first part, and many suicided in sheer despair. The Canadian authorities insisted that each person have one year’s supplies with them: about 2500 pounds weight. This necessitated moving in bounds, taking loads of 100 pounds or so forward, going back for another 100 pounds and so on until the full load had been moved one leg. Then the same process was repeated for the next leg….then the next…..Imagine enduring this process and finding your unprotected provisions knocked off! Animals suffered even more – the trail to White Pass was nicknamed ‘Dead Horse Trail.’

Stopped at several waterfalls on the way – spectacular more for length and strength rather than width.  Unfortunately the fog/mist did not lift, so the view from the pass was restricted to about 100 metres, which was enough to see how rugged the country was, but not enough to see into the forbidding distance. 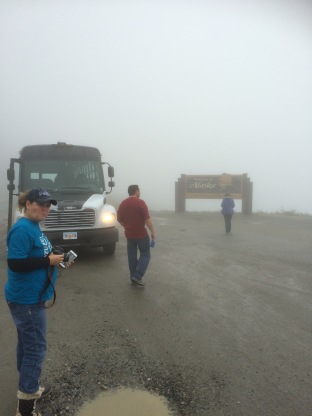 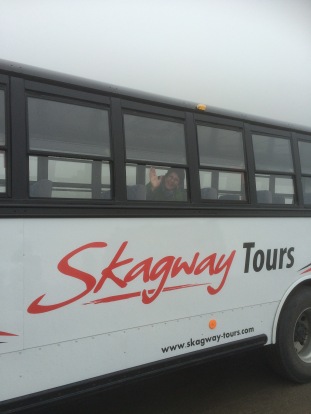 T decided at the border between Canada & Alaska that there was not much point in getting off the bus once again, so remained, sensibly, in the relative warmth.  We did drive into Canada, but not through a checkpoint, but needed to do so to re-enter Alaska. Apparently the Canadian and American authorities could not agree on the positioning of the border control points, so they are separated by a “no man’s land” corridor of some miles.

A couple of lookout points on the way back into Skagway, and then onto the ship for Beer o’clock. Dinner that night was German themed: each night seems to have a different country theme (it was Italian the night before and we think its Mexican tonight).