Trying to avoid too much car time, we planned to more or less restricted today’s activities to the island of Austvagoy, where Svolvaer is located. We had passed up the organized group tour of Trollfjorden yesterday, so made that our main focus today, having discovered, we thought, that a road travels that way. As it happened, Trollfjorden is actually a small side fjord off the strait of Raftsundet and only accessible by water, so we followed the road alongside the eastern side of the strait, which took us over a rather majestic bridge (called, unsurprising, Raftsundet Bridge) onto the island of Hinnoy (Norway’s largest island). 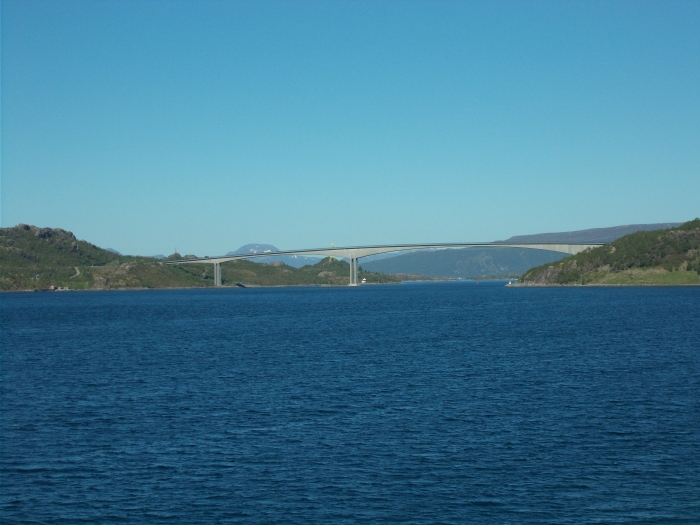 The island as a whole doesn’t make it onto the graphic which purports to represent Lofoten in the tourist guide book for some reason, although a small portion at the very tip does. Google advises that this tip is the eastern part of the municipality of Vagan, most of which is on the island of Austvagoy.

The town – that’s exaggerating its status by a very long way – Digermulen was plugged in to the car’s GPS, which stubbornly refuses to accept our wishes. Paper maps still have a role, even if they’re sometimes wrong, inaccurate or incomplete.

We took a detour to Hanoy, once again seduced by the thought that it was a village that might have a coffee shop – it had instead what appeared to be an abandoned ferry terminal, a small marina and not much else.

After passing through Digermulen and assessing that there wasn’t much more to see before the end of the earth, we about turned and on a whim side-tracked into the ‘town’. The little grocery store had a café attached but it was closed for a private function: as we had originally passed through, T commented on some folk walking along the road, dressed in ‘collar and tie’ and suspected that they were heading to a funeral. The tiny church seemed to have a bit of activity, so we didn’t intrude. A small ferry was docked and as quiet as the Marie Celeste and the few people in the vicinity of the store moved almost in slow motion – one didn’t move at all. The only activity was a service boat from the salmon pens that came in and bustled between two wharves. It was just a little bit eerie.

Some great scenery as we travelled along the strait – and our cameras were inadequate to capture the grandeur that our eyes could see.

There were plenty of folk on the beaches again – and in the water: the eastern side of Lofoten is protected from the wind. The water, however, would still freeze the whatsits off a brass monkey. We ventured out for a beach walk under a mountain near Stronstad where there will be a community festival next weekend, for mid-summer – we’ll miss it, of course. A couple of campers with a tiny tent, and a small very smoky beach campfire took us back to 1972! T enjoyed photographing the variety of little flowers in the grassy seaside edge.

A lunch stop called and from the back of the car we feasted on our version of the loaves & fishes: the brown seed loaf, olive oil, some brie and slices of WHALE salami (we’d bought this yesterday from the deli man at the Svolvaer wharf.) He had advised that at 5-star restaurants, wafer thin slices of whale salami (smoked & salted) are served with crème fraiche and some red onion. So T had prepared an equivalent with yogurt instead of crème fraiche and our bread was fantastic (of course olive oil is the real secret).

On the return we decided to extend the journey by heading back in a loop via Fiskebol and then Laukvik on the north western side of Austvagoy. Laukvik, on the western coastline, was a blustery community/harbor and again seemed strangely deserted apart from a few customers at the Coop, and a French couple who kindly translated the warning sign on the breakwater into English for us – on a device. The warning was to enter at your own risk because of the strong winds.

Basically, it seems that the eastern side of Austvagoy is where the tourist destinations are (ie coffee, galleries…) The western side is a series of tiny villages (mostly sleeper?) but the fishing is the thing throughout, evidenced by the rows of drying cod.

T has abandoned the fantasy of getting a motorhome and meandering in Europe: the roads are too narrow, and there are too many others doing the same. D is relieved!