Skip to content
HomeJust a hop across the Atlantic

Although we were leaving at a reasonable hour to catch a 1 PM flight – well, D thinks 8.30 is reasonable, T has some lingering doubts – we both still awoke at odd hours, our disorientation made worse by the light all night. As it turned out we rose earlier than planned – the alarms didn’t even get to go off! We had a drive, according to Google Maps, of one and a half hours, but as the trip in had taken two and a half, D was not taking any chances, hence the seemingly excessive travel time allowance. And as you’de expect, because we’d allowed plenty of time, everything went smoothly, so much so that we had time to detour into the dock area of Reykjavik for a coffee and a small snack. Just as well, as it turned out, because we had nothing more to eat until a small snack after 6 PM.

Handing over the car, checking in, and clearing security were a breeze. Well, not quite. We entered a lift with a Chinese couple and another young Asian man, pressed the Floor 2 button – nothing. The young man pressed the door button – they opened, then closed. There were four door buttons to choose from – they were all to open the doors, none to  close. We all had a turn – pressed Floor 1, then Floor 2, then Floor 1 again – nothing. Eventually D pressed several of them one after the other in no particular order and the lift rose. ‘It was a special code’ said D. The older Chinese couple chuckled, the young man was deadpan – he may not have heard about Dad jokes.

We’re not sure we even had any immigration check, although that might have been incorporated into the airline check in. The closest we got was a requirement to announce our nationality, but not prove it (perhaps the accents were enough?) as we passed through a gate after security – the attendant clicked us off on her screen with a nod.

The one-hour flight was smooth and although the air was bitter there was no rain on arrival, although we had anticipated it – and it is forecast for the next two days. Picked up duty free (D’s calculation of the wine component required  is different to T’s – we’ll see) and car – an upgrade to a Nissan Qashqai (is that a Scrabble word?) but unfortunately a manual – D has enough to worry about without remembering to change gears, and headed the 45 km or so into Torshavn. On the way discovered that the vehicle had GPS – oh what joy to be told where to go, rather than struggling with maps that were so clearly wrong. The route that the stern lady in the GPS took us on didn’t seem to gel with Google Maps, so D was starting to have doubts but T reassured him that the road signs all pointed to Torshavn. Another feature of this car is that when it veers too far to the right, it beeps a warning. T figured that out, and said nothing until, after the second beeping warning, D felt that he needed to explain what it was, just having worked it out (but there was no need to explain). But the stern lady came good, delivering us to the front door of our apartment, to be met by the owner’s girlfriend Olivia – the owner is a ship’s captain, away on a four-week job in Norway. Olivia lives in a village an hour away but assures us we can call her at night if we need to, as she is accustomed to patients doing just that. We’ll try not to bother her.

T was gobsmacked by the scenery: we’ve come to a collection of minute, sheer rock islands in the north Atlantic, with a road snaking its way at the base, sub-sea tunnels connecting the islands, turf-roofed cottages straight out of a fairy tale, sheep grazing precariously,…and they’ve been inhabited since medieval days? 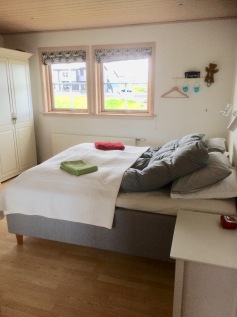 The reception and the facility were/are outstanding and Olivia, a psychiatric nurse, was ultra-helpful. D did wonder whether she was assessing us, but we seemed to have passed.

There were ‘start up’ supplies left for us, along with fresh bread, a thermos of coffee and one of hot water for tea, fresh fruit, and an invitation to use whatever we needed. D started to look for the wine cellar (just joking – and he couldn’t find it).

Initial supplies are in, and after Iceland the prices are a relief.

T claimed the kitchen and has prepared a surprise in the oven (Rose not Eve).

PS. For anyone with a life, see https://en.wikipedia.org/wiki/Killing_Eve

The induction stovetop, by the way, took all of D’s skills to get turned on. He’s had a great day as a code breaker for lifts and stoves.

And now, as dinner smells fill the cosy apartment, snowflakes are falling and it will be light all night, but that’s alright.

3 thoughts on “Just a hop across the Atlantic”