It was time for a (mostly) non-car day, so we started with a beach stroll, taking in the campground, watching birds and then chatting to the Icelandic motor-homers who, like back home, arrive at campsites in the late morning. A group of 4 seniors who live just outside Reykjavik and who love travelling with the long daylight hours at this time of year. When we raised the topic of the months of darkness, the response was that they fill the time with cultural activities: choir, reading and heading to the Canary Islands for a sun fix!

Next, to coffee on a terrace overlooking the sea (more birds) but no new ones.

The barrista seemed taken aback by D’s request for an ‘extra hot’ cappucino (for T): ‘I don’t make it cold.’ He could have been taking the mickey. Learning that we were from Australia, he showed D a photo of the Northern Lights on his mobile, taken just 30 kms from Borgarnes where he has his second job, telling D that we had missed them. D dutifully said how beautiful it was, but that we hoped we might see it in northern Norway, to which the barrista responded that as he saw it every day it was really pretty ordinary. D wasn’t going to let this one-upmanship slide by: he replied that he’d been married for 50 years and has seen his wife every day (that’s stretching it) and she was still beautiful to him (that’s not).  The barrista was quite taken by the idea – it will probably get some re-use soon!

Then a stroll onto the harbor breakwater where a guy was playing with a drone, photographing his family as they drove the red-RIB around the bay. One of the children (a boy about 12 yrs) in a cumbersome-looking suit and life-jacket proceeded to jump off the wharf, then tried to get into the RIB but he was too heavy to be lifted, so needed to paddle to the wharf steps. His dad explained that the outfit was an immersion dry suit (for very obvious reasons).

The Red Cross OP shop was open and T ventured in, exiting without a purchase but prices seemed comparable to OZ. The place next door wasn’t open, so D had to settle for sitting outside….waiting.

A visit to the Museum was a great choice: 2 permanent exhibitions: one was a chronological spread of photos using mainly children in Iceland over the past 100 years to tell the story of the times interspersed with poems and exhibits from the period. 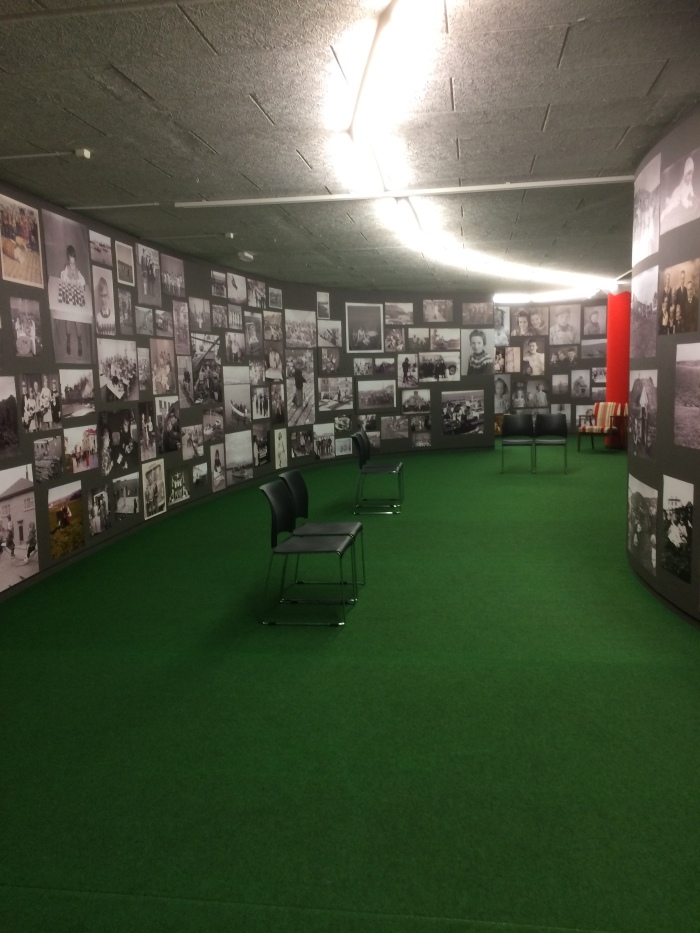 Children were used because the curator felt that the experiences and attitudes of children were universal, and could be understood by all cultures. At the end, T commented to the on-duty staff that it was a marvellous story of how the perspective of children, their roles and status had changed; they had been the ‘slave labourers’ in a subsistence farming culture until WW11. Then everything changed because the country was flooded with American and British serviceman who brought goods and technology: the population of Iceland at the time had been around 125,000 and 225,000 servicemen were stationed here! Post-war brought a new society: electricity +++  ‘And today’ said the woman, the circle has come around with ‘adults being the slaves to children’!

There were a couple of photos that were eerily familiar and perhaps explain D’s Duyputren’s Contracture.

The second exhibition was of Iceland’s birds, a comprehensive display but unfortunately, for us, all the names were in Icelandic. We did however recognize quite a few. The underlying message, again deliberately a universal one, was linked to the shared expression ‘free as a bird’.

T discovered that close by there is a textiles artist who deals in botanical dyeing. So, an email has arranged a quick visit tomorrow even though the studio is not officially open for the season until next weekend.

The penultimate planned activity in the slow day was a trip to the local swimming complex: 3 hot tubs, sauna, 25 metre pool, waterslides all outdoors! All for a senior’s admission of about $4. Here, we discovered the rules (and transgressed a couple of times): shoes off before changing, shower & soap before putting on bathers, towels pre-positioned near showers, modesty dispensed with, shower again afterwards, (picking up towel and drying off before entering change area), and hairdryers, foundation, mascara put back on. Noone seemed to stress at our transgressions.

It was wonderful! Sunshine & 13 degrees, hot tubs at 36, 39, 42 degrees (the latter lobster stuff), a lapping pool at 29 degrees and a wooden sauna with views over the sea. A totally social activity and how marvelous it would be to soak in the dark of winter!

Special treat with dinner out tonight: a walk to the local pizzeria – La Collina. We had expected to sit outside on the deck, with sunshine pouring down, but we couldn’t access the deck as some of the inside customers were blocking the door!!!!!!! Basic pizza, good crust but limited toppings and a glass of red and T is very puzzled about why Iceland has such a high standard of living (high prices on everything) when it doesn’t seem to produce/export much and is a heavy importer…..need to find out. Looks like another Tourist Information attendant is in for an interrogation!

D discovered another Icelandic beer to sample tomorrow, as well as an Estonian one. This is all in the intersts of research.