A 6.15 AM departure on the zodiacs for a visit to Montgomery Reef, promised as the highlight of the expedition.The reef, hundreds of kms long is covered by 6 to 9 metres of water at high tide, but ‘rises’ from the sea as the tide changes. It is spectacular. The coral is adapted to cope with exposure to air, with a coating that retains moisture and protects it from the sun. Scientists are apparently experimenting with this coating to develop it for use as a sunscreen for humans.

As the huge tide was running out this morning, the reef was a series of massive waterfalls. It is now a protected area. T asked about a history of shipwrecks on the reef???? 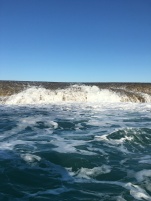 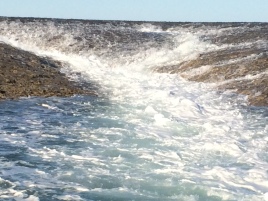 Then, a bit of excitement for us when the steering cable on our zodiac broke, so we were tillerless!Fortunately, the tide was on our side. The rescue boat arrived, but as the mechanic was unable to fix it, another boat was summoned and we transferred across and continued on our way. Our driver Jorge was apologetic, but was reassured he was not at fault: that didn’t, of course, stop the ribbing from the passengers and his fellow crew members. 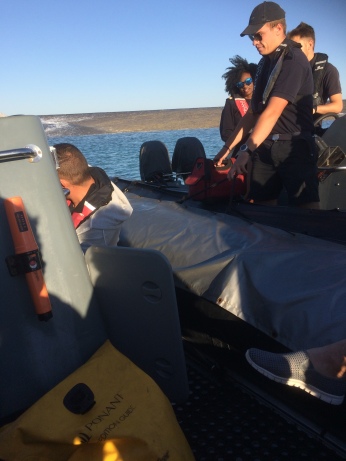 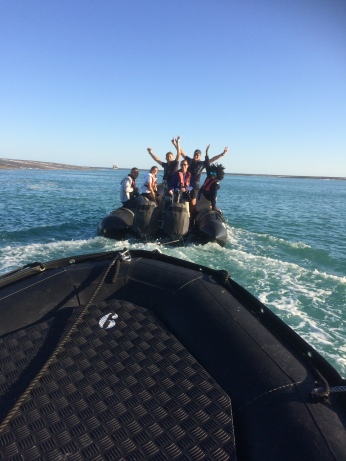 Although wildlife is not abundant we had many very brief sightings of green turtles as they poked their heads out of the water and quickly submerged: as they are still hunted by the indigenous people they are quite sensibly wary. Bird sightings included a White Bellied Sea Eagle and many Egrets: Western Reef, Intermediate and Great.

The morning concluded with a lecture on ‘Rewilding’, a program in the ‘foot’ of Yorke Peninsular re-introducing native species (quolls, barn owls, and possibly Tasmanian Devils) to environments which will predate on feral animals (foxes, rabbits, mice) in order to provide healthier, more sustainable ecosystems. Being a non-scientist, T found this fascinating in its simplicity/complexity.

This afternoon is a zodiac ride across to Raft Point and then a steep hike (for D) over rounded boulders, scree or rocks  to a rock art site. T will go part way, staying at beach level, where the ground is flat and has ordered good photos from D – which again we don’t have the permission of the traditional owners to use on social media.