The Kimberley Coast trip is happening 11 years on…we’ve been wanting to get back to this part of the country since our magical road odyssey of 2007 but time, distance and other commitments ( life, that is) have kept us away. Now it’s time to do the craggy coastline by ship, Darwin to Broome.

The Kimberley adventure is off to a good start. Craig arrived 2 minutes early, alleviating D’s timing worries (and scoring some brownie points). Smooth flight to Sydney and a twenty minute walk to the Mantra Hotel then a train trip to Central to catch up with Phil and Helen.

Helen departed after one champagne, heading for the bus back to Canberra. Phil Ubered us to his pad at the rocks, and then cooked his famous pork Florentine dish derived from his travels years ago in Italy with his wife to be. A delightful, relaxed evening sharing just a couple of red wines. And Phil then arranged for the Uber back to Mascot, trusting that we will reimburse him in due course!

Grumpy alert. What is it about hotel guests that need to slam their doors late at night or early in the morning?

A damp morning in Sydney, but up to Darwin in 5 hours. T sat next to an older lady from Wodonga,  heading for a family catchup in Katherine who shared her life story. Having breakfasted in the airport before embarking, we were somewhat surprised and bemused to be served breakfast at about 11AM – the Qantas staff were equally bemused, but later told us that they were submitting a report suggesting that something approaching a brunch be served instead (eg sandwiches rather than an omelette or yoghurt, which were our choices).

Arrived to a very warm public holiday afternoon ( Darwin Cup Day). Shed the layers, then the  shuttle delivered us to the Ramada Zen Quarter overlooking the working end of Darwin Harbour. Views are not inspiring, but pleasant nonetheless. The lap pool was a boon, and it was cool rather than tepid. A couple of beers before dinner, which we’ve decided to have in the hotel cafe. Overhead fans are whirring, but delightful to not be in airconditioning. 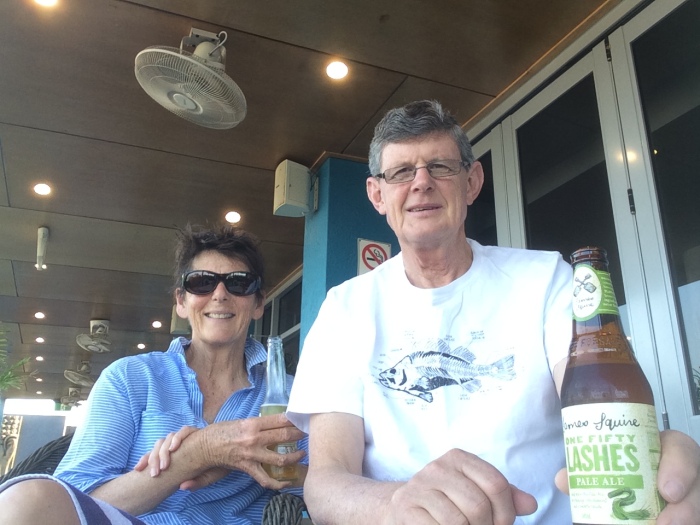