The morning looked a bit cloudy and as we set off to walk to the wharf for our sailing expedition, T said ‘I can hear thunder!’ But no, it was only the sound of the high tide striking rocks in the bay. Phew!

A cruise ship was in, so the craft stalls had set up near the wharf and would stay all day…beads, possum clothing, metal art, wood and leather…because we’d arrived early enough there were a few minutes to browse. T wondered just how successful these markets are.

There was a stiff breeze, unlike previous mornings and T wondered whether she should do a fast shop for Kwells, but skipper Mike assured that we’d be as flat as a tack once we’d cleared the bay and got behind the islands.

There were 11 passengers: Germans, Americans, and lads from Italy (Venice), Denmark and Japan and Melissa from US (who came here as a tourist and fell in love, and stayed) was the deckie. Mike is a Canadian expat (now a NZ citizen, but only just) who has spent the last 20+ years living in the Bay of Islands, doing the tourist season with his 65 foot yacht. In May he goes to Fiji, presumably to do the same. For 6 hours he kept up a constant chatter and patter, telling sailor anecdotes and giving local information on everything from NZ politics, social structure, environment, real estate…and regularly contrasted with his North American roots. Interestingly, he said he had only ever worked on boats; at age 16 he started in the commercial fishing business in Alaska and still divides his time between the around-the-clock fishing on his boat in Alaska for 3 months, making enough money in a good season to live for 2 years, then flies back to NZ. He and his wife +2 babies had set off from Vancouver on their boat in 1978 and spent 10 years at sea, raising the 2 daughters within yachting communities: with all those cruising retirees, missing their grandkids, baby sitters were always available. Some time was spent in Tahiti for the girls to attend high school. Eventually they decided that the Bay of Islands was a good place to put down some land roots and it was easy to buy a shack with million-dollar water views – that has since appreciated as investors realized the value of these views. How things have changed over 20 years.

The young lads and D fiddled with ropes, under Melissa’s directions, while the rest of us just lapped up the day.

We dropped anchor for a beach/ island walk. 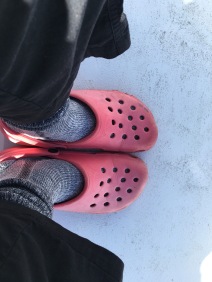 This was a barefoot thing: Mike had explained that the Dept of Conservation required that no shoes & no backpacks could go onto some of the islands. T had a partial exemption; elegant pink crocs while on board and sneakers worn on the beach would be washed upon return to the boat.

While the group climbed the grassy hill, T just did the beach.

Then it was time to bite the bullet…that water looked too good to refuse, even though it was only about 19 degrees. Snorkelled up, D & T ventured in to at least swim back to the boat. Yes, it was cool, but we stayed in long enough to take a look for marine life around the rock ledge…nothing!

Lunch on board, then up anchor and dolphin searching. A pair performed for us at last, leaping high and were then gone. The afternoon finished with a drop off at Russell, across the bay, where the water is deeper at low tide and then we came back to Paihia on ‘the white ferry’.

It had been another beautiful day.

2 thoughts on “Ahoy there!”