After one night in a caravan park in Nelson, with little elbow room – and that’s all it takes – it is time to get back into bigger space (and after T had had a wifi moment attending to some emails). This sojourn brought us back into grandparent territory, as there was a high proportion of travellers with little kids – toddler size – mostly from Europe (actually, a lot seemed to be from Germany, but not exclusively). D was initially impressed by two young men travelling together who patiently waited for their pies to heat in the oven – three each! – which they then accompanied by a small handful of salad greens. They were a bit shamefaced at having those greens once taken to task by D. On a positive note, this Top 10 park on Vanguard Street was excellent in every respect: well organized, clean, lots of facilities and very helpful staff.

A return to Trafalgar St for the weavers’ co-op and the Nelson Museum, a snapshot of the area, although there was a sense that it was slanted to post-colonial times, notwithstanding that the Maori connection was included. There were some interesting stories with a suitable amount of pathos and tragedy. Two of them will suffice.

Firstly. Mrs. Gibbs, recently widowed, and her 9 children were shipwrecked on the Queen Bee. She was rescued but it wasn’t for another three days that it was confirmed her sons had also survived due to great seamanship skills of one of the crew in charge of their lifeboat. The pathos? Many of her possessions, sent as freight to minimize costs, were recovered but then auctioned as salvage: she was outbid on many instances for many of her own belongings! Is this a comment on human nature?

Secondly. This is almost the perfect way to die, except that it wasn’t a vat of whisky or a barrel of beer, but just a big barrel of hops, filled at the end of the picking season. Apparently the tradition was that the women filling the barrels would throw any man who ventured into their workspace on the last day, into the barrel. The proprietor, Mr. Smith, made the mistake of going inside, was promptly thrown into the hops and a woman thrown in after him (what for?) Anyway, that resulted in him receiving internal injuries, of which he died. There was no information about the woman: she probably just ‘hopped’ out.

And then we were on the road again, averaging about 60 km/hr due to the road itself and to the many maintenance work sites happening. This road is now used by heavy transport because the coast road in the north between Blenheim and Kaikoura is closed due to earthquake damage and big trucks pull very slowly up steep climbs. By midday it was very warm, and the afternoon got us up to swimming temp at 27 degrees but there was really no accessible beach. Heading east into the Marlborough Sound region, the road became very, very narrow and winding. The terrain was again rainforest down to the sea, colours of blue and aquamarine.

A short stop at Havelock (claimed as the green shell mussel capital of NZ, if not the world) and do you think there was a wharf distributor/seller in sight? The Mussel Pot restaurant had potential but being early afternoon, it was too soon to indulge. Could we buy some to take for dinner? No, there’s no direct seller in town but you might be able to buy them at the local 4 Square supermarket! Sure enough, there in a tank with water continuously spraying, we self-served. An English couple asked how we would cook them….pour beer or white wine over and wait for them to open….then commented on the quantity we had…for TWO? Yes, we said. At the checkout our bag of 40 or so registered at 2.2 kgs. They came to the register with 10 mussels only and T gave them a couple of shallots. If they’ve never dealt with mussels before, we certainly hope they aren’t allergic! And we forgot to mention the bearding.

The Queen Charlotte Rd took us very, very slowly into Picton and just before that a port in Shakespeare Bay totally devoted to loading cypress plantation logs. 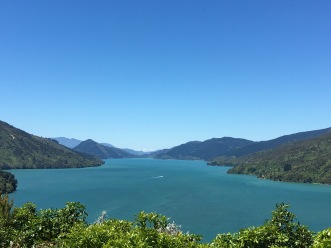 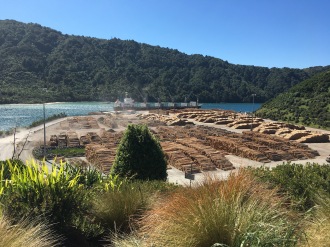 Still heading east we’ve come to Whatamango Bay where the tide is way, way out and that swim no longer attractive.

Can’t believe the amount of space available, let alone a flushing toilet, no one in immediate view and best of all fewer – but still a few – sandflies. As we were sitting at a table admiring the view a NZ rabbit (an immigrant, obviously) came out of the bushes, faced us and did a Haka, thumping feet and angry expressions included. It didn’t finish by rubbing our noses, just scampered back to its hideaway. We’re not making this up – here we are, finally, in a selfie exactly where it happened. 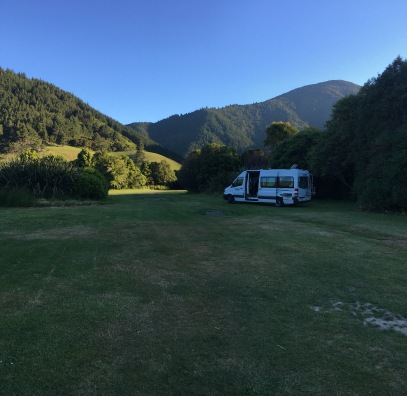 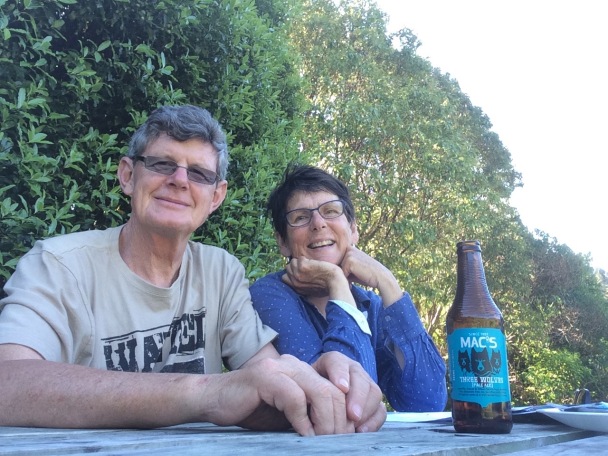