The first cloudy morning in 3 weeks was a bit of a rude shock. The heater went on for an hour, reminding us of where we’re heading…it is after all, still winter! The 100 kms into Port Augusta saw the landscape change with short trees and then the Gawler Ranges came into view and the back of the Flinders.

We hadn’t had radio in almost 4 weeks, so listening to RN Saturday programs had our brains buzzing. There was a story about an Aussie paleontologist joining a team and finding a homo-species in Africa, a couple of food stories and then a tale about the kangaroo king (Andy Comenici?) in St George in the 80s who went missing, presumed murdered…

Port Augusta in sunshine actually presents nicely enough: a marina, some early SA architecture…but the main commercial precinct was sparse. We’d decided to have a very late breakfast there, but café choices were woeful…just a tiny drab one in the main street and a club which had stopped serving breakfast 45 mins before we arrived.

D thought a car wash might be in order, to remove the layers of red sand and of course we were past gravel roads. By early afternoon we were heading down the Yorke Peninsula, admiring the lush wheat fields and gentle vistas and took a brief pause at Port Broughton to do the mounting laundry. We’ve felt so cramped in commercial campgrounds that even the quiet village of Port B seemed too closed-in. We figured we’d find our own camping acreage further south.

So tonight we are in bushland beside Spencer Gulf, having driven down 11kms of grave road!!! and D has just shown me a story in today’s Oz about a young woman, resident in the community of Olary (SA) who’s gone missing…only 3 weeks ago…and her husband (initial suspect of course) shot himself while being questioned by police. Well! It’s exactly 3 weeks since we camped right outside the weird pub in Olary, on the Barrier highway. We posted about D seeking a beer and being abruptly dealt with by the publican. The newspaper story has a pic of this publican outside his pub. The young woman had worked there as a backpacker…The radio story from this morning and now this mystery…the day was looking pretty mundane at midday. We’ll double lock the doors tonight. 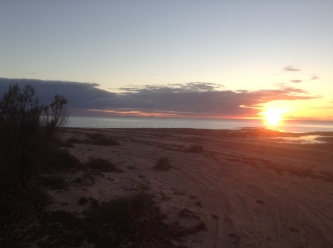