There were some wins today and the day was thankfully milder, as T has been melting in the 30+temps.

The first was gas. D had called in at several service stations to swap an empty 4 kg gas cylinder, to be told they didn’t deal with those, only the 9 kg ones. The ladies at the reception desk at the caravan park initially directed him to Bunnings – yes, there apparently is one – but then realized that he didn’t want a new cylinder but just a recharge, so said ‘we can do that here’. Problem over.

D then dropped T off in town; she wanted to look at a fabric shop (and a tattoo parlour was right next door) and went chasing spare drawer catches: three have been broken, two repaired but one is not repairable so we’re down to one spare. The caravan dealer highly recommended by the park was actually more of a detailer and builder and didn’t hold a big range of items: when asked, his wife looked at the catch suspiciously and gave an emphatic ‘No’. The builder, however, said to wait a minute, went behind a bench, rummaged around and produced a box with half a dozen catches. My kind of guy! He had ‘wrecked’ a Kimberley Karavan that had overturned (as they all do, said his wife!), so passed on two almost- new catches for free.

And thirdly, to the Beaurepaires Tyre Centre on Stott Street – recommended if you ever need tyre assistance in Alice Springs. The slow leak was due to a large crack in the tyre – shudder to think what might have happened if we’d kept driving on it! Tyre (and its partner) replaced, so all good to go.

T had wins at the fabric shop and Salvos (and bypassed the tatts).

But it wasn’t all good news. Back to the park to drop off the van – and noticed that the bumpy road conditions had caused the roof rack to move backwards, and out of alignment. So……off with the jerry can, the tyre traction mats and the spare, spare tyre to reposition and tighten the rack, and then put everything back.

Having sorted all the vehicle issues, T suggested a little drive!!!!!! n this ‘rest’day to take in once again the outstanding vista through the West Macs…words cannot describe the landscape.

Along the way we passed the mademoiselles pulled up about 40 kms out of Alice. They were re-filling from jerry cans. D didn’t stop to offer advice.

Last visit was to Ellery Creek Waterhole. Spoke to two young lasses who were enjoying the quiet (until we came by) who remarked that they’d started to swim to the other side but abandoned that and stopped at the sandbank about 10 metres away because it was so cold!

That’s T on the sandbar – they swam from just to the right of the bushes on the shoreline. 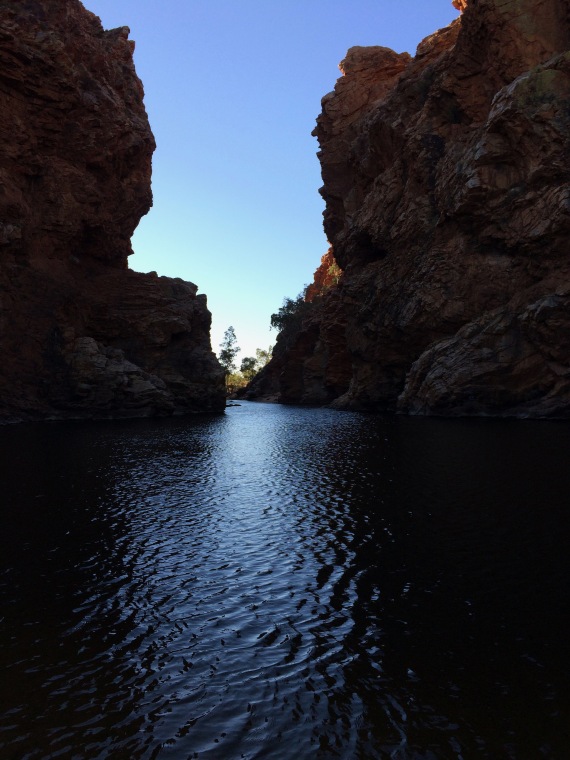 We also spoke later to Chris, who had just finished Day 12 of his Larapinta walk: he spoke of the beauty of the country, something we could readily agree with. Easy to understand ‘connection with country’ when you stop to let it take you in.