A visit to Chihuly before departing Seattle had been planned, based on our itinerary which stated a 1915 flight to Vancouver. However, on checking the tickets (not sure why, actually) the flight time was actually 1140 – and being an international trip, we needed to be there at least two hours before departure, after handing back the motorhome: it wasn’t going to work. So, a departure from the group program, bypassing the scheduled overnight stop in Cascade Locks tonight and heading direct to Seattle to allow the visit tomorrow. Getting that simple change sorted had its moments. We emailed KOA Seattle to ask if we could change the reservation to add the extra night, giving dates: the reply said that yes we could change the reservation – but didn’t actually confirm that this had been done. Another email….and we were expected. As a courtesy, emailed Cascade Locks to let them know we weren’t coming and that we weren’t seeking a refund. Advised that we could neither reserve nor cancel by email (curious, since we had an email confirmation of the booking). A telephone call got voicemail….so we asked the rest of the party to confirm that we wouldn’t be coming: don’t wait up!

A long day – 470 km all on Freeways (84, 82 and 90). The wind played its usual role, making the latter half of the journey a bit scary, and the many sections of narrowed roadway due to roadworks contributed to seat clutching (by T) and wheel gripping (by D).

For the first time on this trip (it is Day 40) we were the first away – a great achievement, probably never to be repeated. Stopped at a little town called Prosser for a late breakfast, as we’d forgone a repast in order to get on the road. Full of antique shops, mostly still closed at 10 AM, but it seemed nary a place to get breakfast. Eventually redirected to Caffe’ Villa, where we had the sort of meal you read Reacher having in one of Lee Child’s novels – excepting we had (very reasonable) espresso rather than cup upon cup of drip coffee like Reacher does. Interestingly, a gent behind D had his cup filled several times by the waitress, just like in the novels. It was dark inside, with no natural lighting, lending it a suitable ambiance. Most of the clientele were elderly (much older than us) in groups around tables, and mostly women. This ‘Diner’ experience was one D had been hanging out for. We both had omelettes – one would have done nicely for both of us, with leftovers. 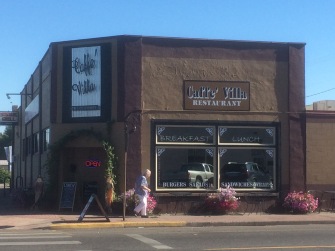 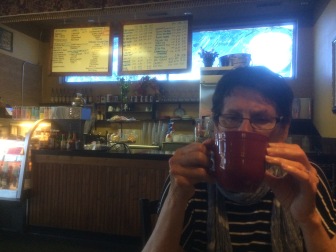 Today’s journey took us through dry/rolling hill & valley country, planted with vines, fruit trees, hops and pasture….rather like the Barossa. Clearly there’s enough water to deliver heavy production. Snow-capped mountains were ahead on the horizon…we presume one of them was Mt St Helen’s. Then it was through Snoqualmie Pass (very, very steep and long descent) in spruce forests and we were on the outskirts of Seattle, with 4 lanes of traffic screaming each direction. T was more than relieved to step out of the truck. D was relieved that the gripping-wheel -hands could relax.

And for the first time in 40 days we were able to get a radio station that played T’s preferred music. Searching through 5 bands of stations, nothing was familiar/to her liking until a public radio station delivered just the ticket. Early on there was a station doing a post-mortem on the Presidential debate (yesterday?) Although the commentators declared a non-partisan position, they were somewhat critical of Hilary’s “too prepared” approach but then critical of Trump’s failure to ask questions about the Clinton Foundation. So, it was time to find a different station. Roadside signage called for voters to Make America Great Again with TRUMP.

D has given the truck its final washdown. Tomorrow, we’ll take public transport into town and do the tourist sights (The Fish Market, Dale Chihuly’s Garden, Sky Needle….).

One thought on “Forty days and….”