A summer’s day, how bizarre! Today was “avoid the freeway” where possible, so the short run became a long loop through the agricultural canyon of the Snake River. 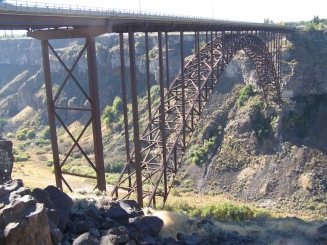 An amazing early 20th century engineering project that dammed the magnificent ‘western Niagara’ falls called Shoshone, reducing them to a trickle, and turned a vast desert into irrigated food production. And it certainly looked a wealthy farming system. 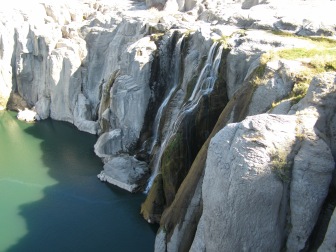 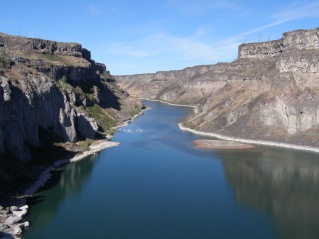 As we approached the gate to Shoshone Falls, the attendant commented on the embarrassing political nightmare that the country is in. T suggested that he access the 1800 number seen on a sign at the bridge over the Snake River we’d just crossed. It said “Need Hope? Call 1800…..” Later in the day, at the end of the food bowl drive, a private home had a big sign on its roadside driveway: “Store your food and your ammo. You’ll need them”.

A quick trip into Twin Falls looking for a coffee: surely a city of over 45,000 would have lots of espresso cafes downtown? Not so – the malls and large shopping strips have resulted in the cultural, old centre being virtually deserted. We found an espresso (of sorts) at Burnie’s Bumps, basically a bar and dance club that remained open until 3 AM (the only one), although the flow of alcohol was turned off at 1 AM. Burnie was a refugee from the Yugoslavian crisis in the late 1990s and had successfully settled and intehrated in the US. He was happy to talk of this, as was his wife when she came in.

By the way, should you ever visit Twin Falls, 2nd Avenue is one way.

Now camped at Boise, next Pendleton and ahead we have 2 days of driving to reach Seattle.