Yes, Monday morning means garbage truck calling!…same as home. A list of things to do in next 40 hours…starting with a fight with the apartment stove, the reason we choose apartments is to be able to self-cater as much as possible and now that we have the squeezable olive oil, there should be no stopping us…BUT.

Vigeland Sculpture Park was a wonderful start to a day focusing on humanity and the bonds we all share. The sculptures, capturing the physical and emotional contexts of humans was terrific and a number really resonated. The park was very much a ‘peoples’ park’ and on a beautiful summer day, there were plenty of them. 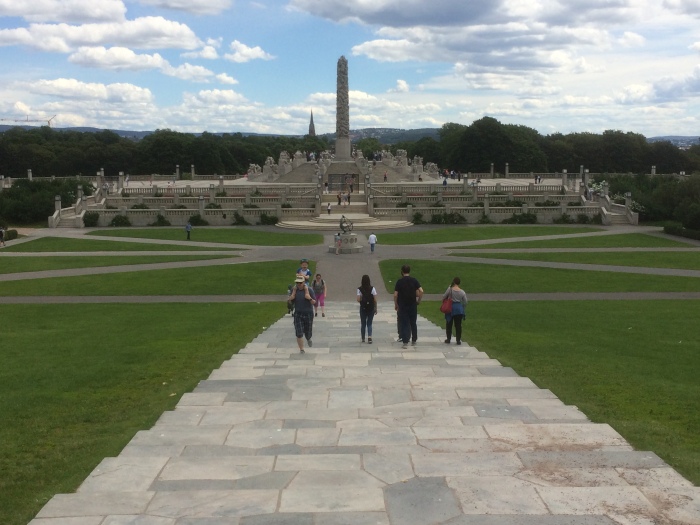 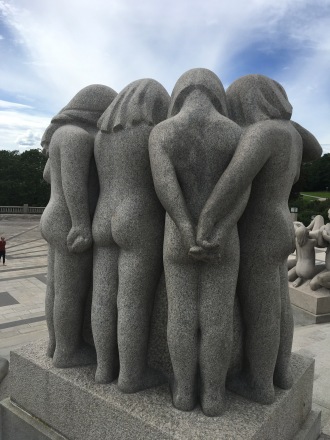 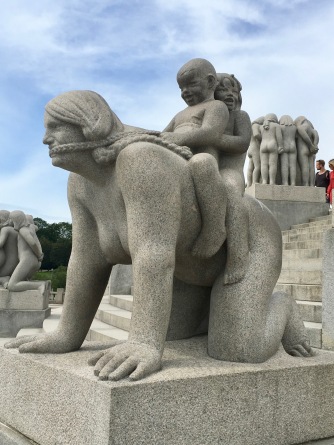 And who was the model?

When T ventured to the toilet block to find that….yes, one pays (the plastic card should be exhausted after this trip…we’ve needed no cash at all), she was surprised to find that the young man attending the payment table had doubled as the baby-minder of a very small infant in a pram outside the block while the mum took her toilet stop.

And no respect for non-military statues, either!

Next stop was the Nobel Peace Museum, where a gorgeous young guide escorted a small group through the history and selection process of the annual awards and a focus exhibition on the two joint 2018 Peace prize winnersfor their efforts to end the use of sexual violence as a weapon of war and armed conflict.

Nadia Murad is a young female Yadizi from Iraq, whose work was on ending sexual violence as a weapon of war (having been a victim) and Denis Mukwege who is a gynaecologist/obstetrician from the DR Congo has specialised in treating the female victims of war crimes and advocating for them. It was a very confronting topic, handled excellently.

After this visit, we could not face the Holocaust Museum, opting instead for a quiet sit down at the Nobel Museum café, where we observed the bustling of humanity and a delightful scene in which a younger woman was teaching an older how to ride the electric scooter. After several back & forth rides with both women on the scooter platform, the younger one got off and the older was shepherded to independent riding. After 30 mins they seemed pretty pleased with their success.  The watchers in the café spontaneously applauded, much to the delight of both riders.

Wandering back to the tram stop took us right past a second-hand ‘vintage heaven’ shop (UFF) that T had located in this morning’s research. ‘I’m just after…’she announced and D sat patiently on the front step for a couple of hours as T explored. Success! Just the thing for a grandaughter’s upcoming birthday!

And as we waited for the tram, the crowd just quietly swirled past, as it had all day: on foot, on bicycle, on scooter, on moped, in prams, on shoulders, hand-in-hand……. For all our comments on ‘social isolation’ or aloofness there is also an overwhelming sense of security and safety.