Church bells rang and rang. ’Maybe it’s a funeral’ said T. ‘No idea, but there’s lots of people over there at the church,’ said D.

The day looked bright enough, so the thought was to take a short ferry ride across to Nolsoy, have lunch in the café and then get the late afternoon return. If rain set in, it would be a long afternoon in a picturesque village, sipping coffee or perhaps something else. So, having sorted out routes and parking beforehand, down to the wharf to find out. And discovered a neat way to turn an outboard motor into an inboard motor.

Everything seemed quiet…including the ferry terminal. A few staff were at desks, but there were no passengers/tourists about. T approached a guy at a computer, behind a desk, behind glass…the ferry we wanted would leave at 1300, as ‘today is a Sunday timetable’…?     ‘Why?’     ‘It’s a public holiday’   ‘Why ?????’…get translation from another staff member… ‘It’s, how do you say it… Ascension Day’…hence the church bells, hence the quietness in town.

So, perhaps a revised plan, since most establishments were closed – even the Tourist Office, supermarkets and many cafes were, so perhaps the café on Nolsoy would also be closed: too great a risk.

A coffee to decide on plan B. Found a café and had an interesting chat with a couple from Austria who were finding the Faroes culturally so different from their own. When pressed for more detail, the explanation seemed to be based on a Protestant vs Catholic cultural difference. They were finding that the Protestant churches were so unfamiliar, so ‘simple’, no saints, no ornamentation, no ‘Mary focus’, none of the ornate artwork of the Catholic tradition. T has appreciated the minimalist approach, the pared- back references to Jesus, the lack of saints…, a recognition of the environment.

So, somewhat inadvertently once again, our day took in some more churches; after coffee, a visit to the Torshavn Cathedral and then at day’s end, to St Olav’s and the 16thcentury remains of the Norse Cathedral in the tiny village of Kirkjubour. D was not allowed to pull on the rope to ring church bell. More later.

In between church visits there was a terrific display of the natural and cultural history of the Faroes at the National Museum and the adjacent Outdoor Museum which had preserved a farm & its outbuildings (dated from the 1700’s). (Dad joke warning) D particularly liked the Peat House – was that Pete standing outside? 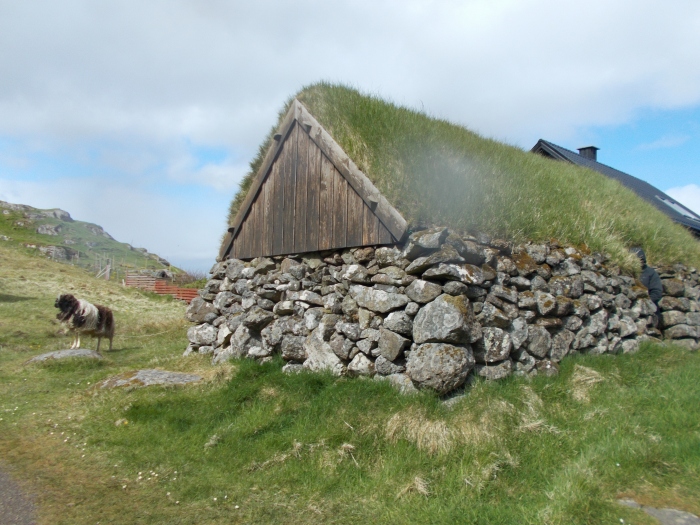 The bull pen was another significant site.

The afternoon wind was so severe that even the chicken seemed so frozen in the rock lee that it couldn’t muster the effort to move out of our way. 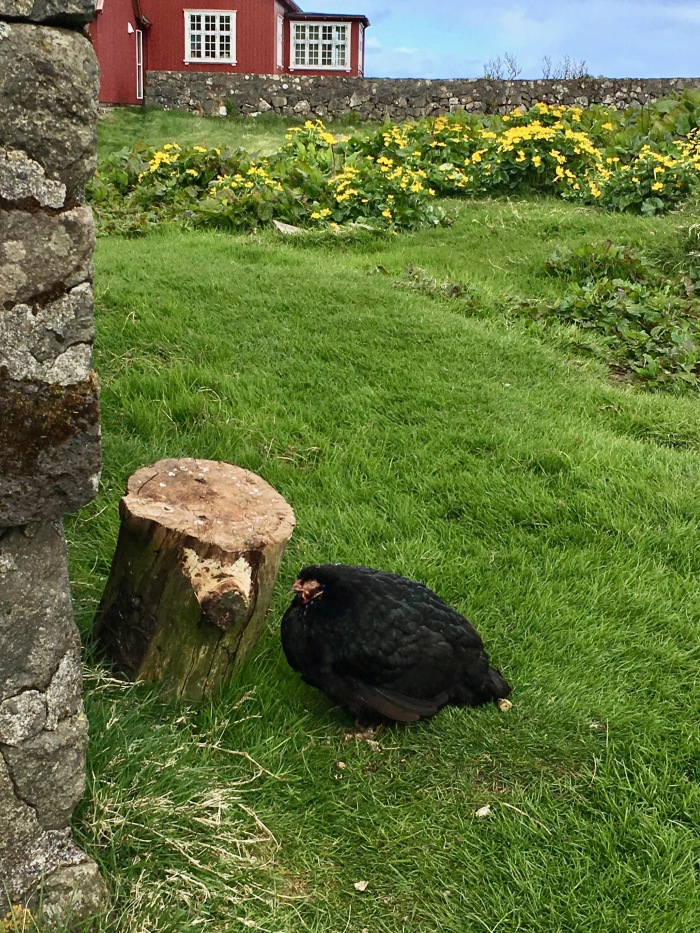 The car said the temperature reached a high of 7 degrees – with a very strong wind chill factor, we reckon it was hitting minus.

A late afternoon drive took us to Kirkjubour and alas, 2 tour buses had just arrived, with passengers rushing to the WC just as Gudrun had said back in Iceland! So we headed in the opposite direction, walking into a fierce headwind and came across a small shelter (farm outbuilding) where 2 young women in lycra streaked with mud, and running back- packs, had sought refuge. We invaded their space as they munched on muesli bars and learnt that they were sisters from Sweden, were on a ship travelling back to Sweden from Iceland and had 5 hrs land time in Torshavn. One sister was studying Mechanical Engineering and had completed an exchange – the other had come to bring her home. They wanted to visit the village of Kirkjubour in that time and were keen on running, so had run ‘over the mountain trail’. After 10 mins chatting with us, they were off…back onto the trail, albeit with one false turn.

St Olav’s was suitably minimalist (T loved the painting behind the altar) and the cathedral ruins were impressive (T couldn’t help but think of the eerie symbolism…the demise of the Catholics..) 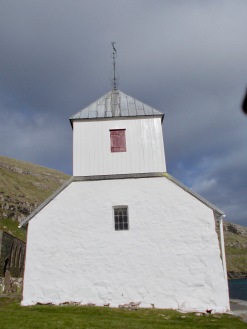 The last highlight at Kirkjubour was coming across a local resident who was cutting up and preparing whale meat from ‘a hunt’ that had happened yesterday. We had seen the hunt while on our road trip yesterday morning; T had commented on power boats chasing fins (we presumed dolphins) somewhere around Kollafiordur. We had not stopped to join what we thought was a tourist attraction, as all viewing points were full. It turns out that this had been a ‘hunt’, which happens randomly, perhaps several times a year, obviously depending on the Pilot Whales coming near to land. Someone sees a pod of whales and phones a network of fishermen + also the police chief to get permission for a hunt. Yesterday we saw maybe a dozen boats, herding the whales toward a beach. From today’s account, we didn’t grasp whether 150 were in the pod, or whether 150 had been killed, but the process is that their sonar is confused by the boats, they are herded onto a beach (apparently they can only kill them if they’re beached) and are then speared through a hole at the back of the brain causing instant death – a justification that ignored any panic and suffering that might have occurred in the herding and the beaching. Then, according to a formula possibly based on the number who are involved in the hunt, or the number of whales or the number of residents in the village nearest the beaching, the whales are equally divided up. We learnt that if we’d been on the beach and involved in the killing part, (we would have needed to sign our names on the hunt register), then we would have been eligible for a share of the meat. Thus, the ‘whale butcher’ was preparing his share although he hadn’t taken part, some of which would be salted, some frozen and some air-dried and would be good for his family to eat for a couple of years. He was happy to talk, bloodied hands, bloodied jumper (T admired the traditional knitting pattern) and mentioned that he’d spent some time working on a dairy farm in SW Western Australia 30 years ago…It had been a good experience. T’s dinner menu tonight is still undecided! 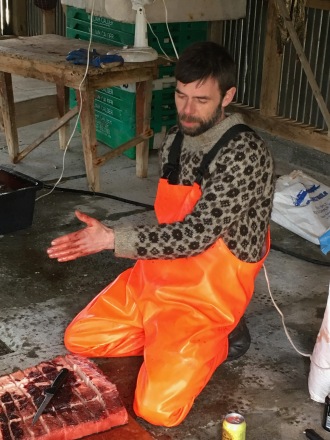 Some great views bfore we departed, as the sun was setting (no, it wasn’t!) 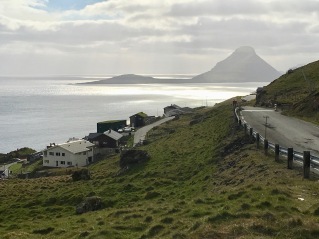