An intended quick dash to Nelson to sample some culture and creativity was slowed by multiple road maintenance sites. We arrived at the WOW (World of Wearableart) Museum around midday. The museum is an unusual mixture of wearable art (no surprise there) and vintage cars, with a fairly hefty entrance fee. However, T was not deterred and spent a whimsical hour with the art/design/costumery of the 2016 WOW competition entrants. This event has been going for 30 years and attracts entries globally. Exhibits included here are made from plastic, felt, rubberbands and …..any and every kind of material can be used and a recurring section of the competition is devoted to the bra. D amused himself with a newspaper and reported some world and local events to T, who decided that it had been better indulging in the world of the fantastical. 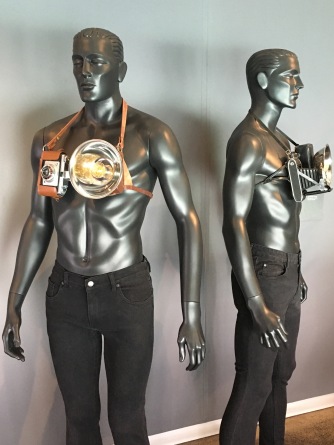 Nelson is a maintenance stop, the last before handing back the van next Monday in Christchurch. Loads of washing done and hung under a threatening sky and we were off to walk into the city centre to look for the promised creativity. We didn’t really find it, with Trafalgar Street, the reputed location, mainly made up of the usual sort of familiar retail outlets.

Down one side and up the other didn’t add to our cultural store, but did result in two books and a haircut for D and two trousers for T.

At the end of Trafalgar Street was Trafalgar Square, and at the top of the hill was the Anglican Cathedral, a rather somber grey granite edifice, which was similarly austere, but not forbidding inside and the organ was being played.

The steps leading up to the Cathedral (into Trafalgar Square) were a great contrast, and, despite the climb, more inviting to continue upwards. 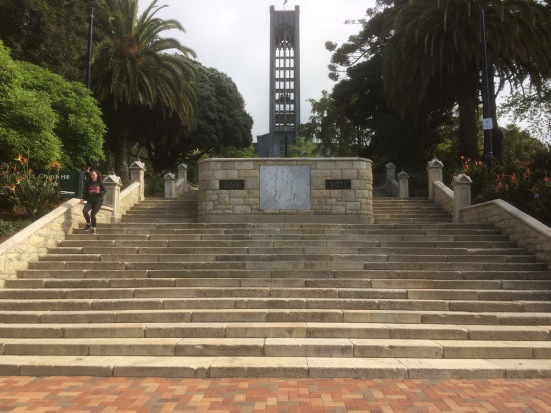 Towards the end of our rambling T did discover a hand weaving store, but the on-duty manager had shut up and was rushing away to get to her yoga class in three minutes. Only thing for it was to cross the road to Mac’s and have a craft beer: the Route 1881 American Pale Ale, which was delicious. What a joy it was to sit outside without the biting bugs….but come 6:30 back at the campsite, here they are again!